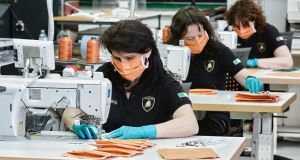 Ford and Seat have both turned over vehicle production lines to making ventilators, which can help treat those with the most serious Covid-19 symptoms. Meanwhile, Lamborghini has begun making face masks and shield visors at its factory in northern Italy.

Much as happened during the second World War, car makers are rapidly repurposing their factories and facilities to making much-needed kit for hospitals and medical staff. We’re not quite at war-levels of factory conversions yet (Ford’s famed Willow Run plant went from open farmland to the biggest factory in the world, turning out huge B-24 bombers at the rate of one an hour in just two years) but the speed with which car production has been halted, and medical equipment spun up, is genuinely remarkable.

Seat has today said that its factory in Barcelona has started making medical ventilators where normally it would be building Leon hatchbacks. Working with fast-prototyping experts from Protofy.XYZ, Seat’s engineers have rapidly carved their way through 13 prototypes of the new ventilator. The finished article uses gear wheels and a gearbox shaft made by Seat in its Martorell factory, just outside Spain’s second city, while part of the mechanism uses a re-purposed windscreen wiper motor.

“The motivation of everyone participating in this project is that with our know-how we can mass-produce equipment that will save lives”, said Nicolás Mora from the Seat’s production staff. “Taking an assembly line that manufactures subframes, a car part, and adapting it to make ventilators has been a lengthy, difficult job involving many areas of the company, and we managed to do it in the record time of one week”, said Sergio Arreciado from the process engineering team at Seat.

Each of the Seat ventilators uses more than 80 electronic and mechanical components, all of which are sterilised under ultra-violet light, and which have been approved by the Spanish Agency of Medicines and Healthcare Products.

Ford has, in America, been working with GE Healthcare to develop its ventilator, which will be built at its Rawsonville components factory in Michigan. A bomber an hour? Not quite, but Ford is promising to produce 1,500 by the end of April, 12,000 by the end of May and 50,000 by July 4 - helping the U.S. government meet its goal of producing 100,000 ventilators in 100 days. In spite of the ramp-up of ventilator production, Ford now says that it’s postponing plans to restart vehicle production at it North American factories by either the 6th or 14th of April. No further possibel re-start date has been announced.

“The Ford and GE Healthcare teams, working creatively and tirelessly, have found a way to produce this vitally needed ventilator quickly and in meaningful numbers,” said Jim Hackett, Ford’s president and chief executive. “By producing this ventilator in Michigan, in strong partnership with the United Auto Workers union, we can help health care workers save lives, and that’s our number one priority.”

The Ford-built ventilator, the design of which is licenced from medical systems maker Aion, is called the Model A/E and can actually be used without electrical power, as it’s designed to deliver oxygen to a patient’s lungs at atmospheric pressure. That means that it’s quick to set-up, and can be used in an A&E setting, as well as at a bedside.

Lamborghini, lacking the sort of big-scale production facilities of Ford or Seat, is instead making surgical masks and face shields at its factory near Bologna. In one of the hardest-hit areas in the world, Lamborghini’s technicians and upholsterers are now turning out masks and shields, and donating them to Sant’Orsola-Malpighi Hospital in Bologna. It’s a combination of low-tech (sewing machines and stitching) and high-tech (3D-printing and carbon-fibre) methods. Stefano Domenicali, chairman and chief executive of Lamborghini, said: “During this emergency, we feel the need to make a concrete contribution. The Sant’Orsola-Malpighi Hospital is an institution with which we have had a collaborative relationship for years, through both professional consultancy in promoting programs to protect our workers’ health, and in research projects. We will win this battle together by working in union, supporting those who are at the forefront of fighting this pandemic every day.”

By night, the Lamborghini factory is also being lit up in the colours of the Italian flag. Every little helps, we suppose.