But extra expenses on staff and operations could be offset by higher sales, relief from business tax 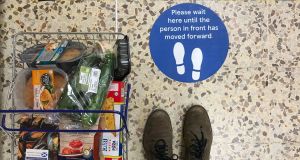 Social distancing markers at a Tesco shop as part of measures to help curb the spread of coronavirus. Photograph: Aaron Chown/PA Wire

Retailer Tesco expects to take a hit of up to £925 million (€1 billion) from the costs of dealing with the coronavirus pandemic and warned it was unable to give a profit forecast for this financial year.

However, the supermarket group said on Wednesday that if customer behaviour returned to normal by August, it was likely the extra expenses – mainly related to staff and operations costs – would be offset by higher sales and relief from a business tax introduced to help companies.

“There are significant extra costs in feeding the nation at the moment but ... Tesco is a business that rises to a challenge and this will be no different,” chief executive David Lewis said, as the company reported a 14 per cent rise in underlying operating profit for the year ended February 29th, broadly in line with expectations.

Industry data earlier this week showed March was the busiest month for Irish grocery sales ever recorded, as shoppers bought more than they did during the Christmas 2019 period.

Grocery sales reached €2.8 billion over the course of the 12 week period, €250 million up on the same period last year and exceeding the previous peak seen at Christmas.

Tesco grew sales by just more than 10 per cent, and now has a 21.3 per cent share of the grocery sector.

UK grocery sales leapt more than a fifth to a record £10.8 billion in the four weeks to March 22nd.

However, the crisis has come with higher costs, such as social distancing measures that restrict the number of shoppers in store at any one time, expanding online delivery operations, staff bonuses and hiring more employees.

Tesco’s wholesale business is also likely to have been hit hard by the closure of restaurants and cafes. – Reuters

1 Should my mam wait for house prices to drop before buying?
2 Apple tax case: Four individual lawyers paid over €500,000 each
3 Parts of Brown Thomas and Arnotts to reopen next week
4 Thailand attempts to lure travellers with luxurious lockdown options
5 Irish whiskey sales near milestone of 12m cases a year
6 Brother is dragging his heels as executor of uncle’s will - is there anything I can do?
7 Covid-19 mortgage breaks: What’s the catch?
8 ‘I have a talent for justifying purchases’
9 Irish comic book artist designs face mask coverings for young flyers
10 Hangover for the drinks sector as pint sales go flat
Real news has value SUBSCRIBE