Model trains: Carving out a little corner of quiet in a noisy world

Glen Murphy fell in love with trains as a small boy. He is a model railway enthusiast and says that it is a hobby for life that has helped pass the time during the Covid-19 lockdowns in 2020. Video: Bryan O'Brien 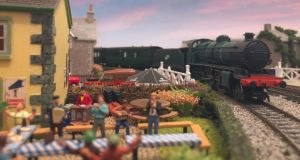 A simple train set can make for an ideal Christmas present that can kickstart a lifelong hobby. Photograph: Glen Murphy

What do Rod Stewart, Walt Disney and Neil Young have in common? Apart from being household names across the world, they each have a love for an unexpected hobby – railway modelling.

Stewart revealed his enormous depiction of a 1940s American city in the attic of his Beverly Hills mansion last year in an interview with Railway Modeller magazine. Disney built a miniature railway around his home complete with working steam engines and Young is a self-confessed train nerd who built a layout for his son and is part-owner of Lionel model train company in the US.

The first lockdown offered many of us more spare time than we knew what to do with; plenty of hours to practice that dusty instrument sitting in the corner or finally bake that banana bread for Instagram. My distraction was my first attempt to make a proper model railway complete with tracks, stations, buildings and scenery.

The greatest thing the hobby has to offer is a sense of satisfaction and more importantly, fun

My first electric train set was a Hornby Thomas the Tank Engine when I was about five-years-old, soon followed by the prized Flying Scotsman set one Christmas in the early 2000s.

I’ve had a life-long love of all things railways, partly due to hearing stories about my great-grandfather who worked for CIÉ at Kildare town station until the 1950s, and modelling is a big part of that.

Before lockdown, I hadn’t attempted to make scenery and had bought the few buildings I had, as well as trains and track, off the shelf from manufacturers such as Hornby and Bachmann from various model shops. My pre-lockdown set-up was just two loops of track on a plain white plywood board with a few buildings dotted around.

Back in March, as the world slowed down, I had the chance to embrace the hobby again and try to go from the childhood train set to a decent-ish-looking model railway.

Manufacturers have seen a healthy increase in sales during the pandemic with retailers struggling to keep up with online orders. Hornby experienced a sharp increase in sales in the first half of the year after several years of less than stable trading.

There are plenty of useful skills to learn from this hobby, be it carpentry when building the baseboards or electrics when wiring everything up. My carpentry skills are already at their limits assembling an Ikea desk so my baseboards were pre-built years ago and the wiring on my layout is just a couple of wires soldered directly on to the track and plugged into a controller running off the mains.

One challenge I set for myself was to make as many buildings and vehicles as possible instead of just buying off the shelf ready-mades. Simple card and plastic kits can produce quality results when assembled slowly and carefully. My first attempts back in April were less than successful and half of them ended up in the bin.

As it became more evident that lockdown was going to drag on well into the summer, it was a chance to make hay while the sun shone on the empty streets. Most days a package arrived from model railway shops in Ireland and the UK with supplies and soon, basics such as kits, glues and paints sold out.

The kits became easier to assemble the more I built and soon a small village popped up on the board.

I spent hours as a kid, and still do, reading magazines and looking at layouts belonging to clubs and individuals that appear indistinguishable from full-size prototypes. It was very easy to get jealous mainly because of the seemingly acres of space they had to play with, something the rest of us can only dream of.

Putting kits together and building up the scenery around the tracks kept the worst of lockdown’s monotony at bay at the peak of the first wave. It provided an escape from the relentless news cycle of case numbers and once-a-day walks with a 5km radius.

The personal touches added, including an Irish Times newsstand for the platform and putting a name board from my local corner shop on the layout, brought the model to life in a way I’d never found before.

When I encountered any problems, like attempting a daunting task for the first time or trying to fix a mistake in a build, I was able to turn to friends with much more experience modelling than me and to an online global community of modellers in multiple Facebook groups, forums and YouTube tutorials.

Even the simple words of encouragement in a comments section were heartening at a time when things felt so bleak and still do during this winter of further Covid-19 restrictions. The completion of a project after several evenings is enough to make you forget about the case numbers and stop your mind from racing away with itself. In a way, I think completing tasks like this and building something up almost from scratch can be a form of mindfulness.

With other hobbies, it’s hard to not constantly compare yourself to the accomplishments and abilities of others. In railway modelling, things go entirely at your own pace and the end product is the result of your own creative efforts.

Some people create models of a particular location, on a particular day in a particular year and with the exact working timetable in miniature. Older people in the hobby tend to build what they remember from their childhoods.

As a kid, the train set helped me deal with the bullying I experienced in school and now, the hobby has helped me get through this difficult time.

The greatest thing the hobby has to offer is a sense of satisfaction and more importantly, fun. If something isn’t fun why bother in the first place? Whether it’s recreating Limerick Junction down to the smallest, fussiest details or an entirely imaginary setting, the most important thing is to remember the first rule of train modelling: it’s your layout and you can do whatever you like with it.

A simple train set can make for an ideal Christmas present that can kickstart a lifelong hobby. After all, a model railway is never really finished.

An interest in trains is not a prerequisite but a desire to create something of your own and carve out a little corner of quiet in a noisy world certainly helps.