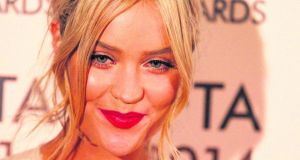 Presenter Laura Whitmore at the IFTA Awards in 2014. Whitmore had to contend with a number of technical glitches during the ceremony, including viewers being unable to hear her. Photograph: Stephen Collins/Collins Photos

The National Lottery had to defer its weekly prize draw for the first time in its 28-year history on Wednesday because of a technical hitch. Thousands of ticket terminals across the country were not working because of a telecommunications problem, it said. The draw took place the next day. The “technical hitch” is often just that, but it can also be a euphemism for human error.

1 On the night of May 2nd, 2011, Osama bin Laden was shot dead in Pakistan by US navy Seals. A presenter on Fox 5 DC, a Fox News station in the American capital, told viewers that “President Obama is in fact dead”. The mistake was blamed on a technical hitch with the teleprompter. Fox 5 wasn’t the only Fox News channel, nor wider media organisation, to mistakenly use the name “Barack Obama” for “Osama bin Laden” that night.

2 Last month RTÉ confirmed that it would not be showing this year’s Irish Film & Television Academy awards. This follows the “technical hitches” during last year’s broadcast, when viewers struggled to hear the event’s hosts, Laura Whitmore and Simon Delaney, over chattering guests and clinking glasses.

3 Last year’s Winter Olympics, in the Russian city of Sochi, were the most expensive Olympics staged yet, with costs of about €50 billion. During the spectacular opening ceremony, however, only four of the five giant Olympic rings in the stadium opened up. Russian television cut to footage of the five rings working perfectly in a rehearsal.

4 Three years ago Fr Martin McVeigh suffered an embarrassing glitch when hosting a First Communion meeting with parishioners in Co Tyrone. Instead of the intended visual images being put up a screen, a selection of gay pornography appeared instead – because of a “technical hitch”. Fr McVeigh said the images were not his.

5 When Spiderman: Turn Off the Dark, with songs by Bono and the Edge, opened on Broadway in 2011 it was one of the most expensive musicals ever staged. A remarkably unfortunate series of technical hitches led to cast members breaking bones in falls and one of the lead actors being hospitalised. The show closed after just two and a half years of its expected five-year run.

6 A show by Robbie Williams at Croke Park in 2006 was so beset by technical hitches – including the singer being left suspended in a gondola dangling from the lighting rig – that a mortified Williams vowed to come back to Dublin to perform for free – which he did, at a charity show at 3Arena, a few years later.

7 Technical hitch was too small a phrase for it. The incident produced a new euphemism – “wardrobe malfunction” – to describe the partial baring of Janet Jackson’s breast during a half-time dance routine at the Super Bowl in 2004. Nipplegate, as the event also became known, led to lawsuits and a clampdown on “indecency” on US television.

8 In August 2009 the BBC transmitted the first show of its new soccer programme, The Football League Show. During the first match broadcast – Torquay against Chesterfield – the transmission suddenly cut to footage of a woman sitting on a toilet. The corporation apologised for the “technical hitch”. The toilet footage was from the teen surf movie Blue Crush, starring Kate Bosworth.

9 With 1.9 billion people from 150 nations watching, the giant Live Aid concert from Wembley Stadium in July 1985 was coming to a close with a set by Paul McCartney. But as he sang Let It Be his microphone failed – perhaps the most watched technical hitch ever.

10 And a technical hitch that wasn’t . . . When the acclaimed US TV series The Sopranos arrived at the final scene of its last episode, in 2007, its director, David Chase – who had also created the show – opted for an abrupt cut to black. TV channels across the world reported calls from viewers irate that a “technical hitch” had caused their screens to go blank, leaving them in the dark about what had happened to Tony Soprano.