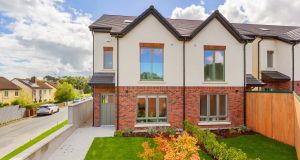 With a number of autumn new homes launches under way agents are reporting brisker than expected sales, in particular in north Wicklow, with strong interest from buyers moving from the capital.

SherryFitzGerald reports 91 sale agreed new homes in Dublin and a further 57 in  Co Wicklow so far in September. The month got off to a strong start with a sell out at Churchlands, Delgany, for Wood Group where all 20 three- and four-bed units sold for between €445,000 and €485,000.

Meanwhile Redwood, a luxury boutique development of just eight detached houses in Enniskerry village was well received when it launched a fortnight ago say Hooke & McDonald managing director Ken MacDonald. “Five of the eight houses have now sold at prices from €995,000 to €1.2million.” A rapid result by any reckoning at the stickier high end of the market. Four of the buyers are moving from Dublin.

More city buyers flocked to Wicklow when The Orchard in Greystones  launched on September 5th. Eight of its nine units have been sale agreed. Of the five units that launched, all four of the four-bed semis, asking from €645,000, were bought by buyers who viewed them on the first day, says developer Jonathan Turner of Dunmoy Properties. In the next phase (which has yet to be built), a further four four-bed semis are priced at €585,000, and three of these are already sold.

Selling agent Derrick McGovern puts it down to: “Pent-up demand, population growth and an exodus of people moving out and looking for more space. Nearly all of the buyers were from south Co Dublin.”

Coastal properties held their appeal too in Dublin 5 when Jameson Court, just off Watermill Road in Raheny, launched on August 29th. DNG reports 10 of the 12 mainly four-bed units priced between €690,000 and €750,000 have already sold.  While across the capital DNG reports sales of  70 new homes so far this month.

Through July and August Savills says it sold a total of 114 houses across three major developments; St Josephs in Clonsilla for Castlethorn; Barnhall Meadows in Leixlip for Glenveagh and Clay Farm, Leopardstown for Park Developments.

Based on the current trend away from higher density living the timing could be good too for upcoming launches of   two sizeable seaside schemes of three- and four-beds at brand-new developments: Skylark at St Marnock’s Bay for Quintain with prices starting from €485,000 and Bay View at The Coast, Baldoyle, for Richmond Homes, where prices will start from €410,000.