Roof with a view at bijou canal cottage for €350k 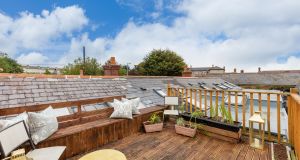 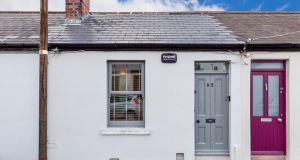 Harold’s Cross Cottages is a warren of more than 100 one-storey terraced houses built in a series of short roads by the Dublin Artisan Dwelling company, and hidden just off the Grand Canal at its Harold’s Cross bridge end.

When they change hands in original condition owners inevitably do work that starts with creatively imagining the small spaces. Prices range considerably as some still come on the market in near original condition, while more have been significantly upgraded.

The owner of number 85, nicely situated in a short cul-de-sac, bought about 10 years ago when the property had been renovated. It came with a rare feature – a large timber decked roof terrace to the rear – a prized slice of private outdoor space in this area as the planners are no longer keen on them.

Before moving in to the two-bed 41.3sq m terraced cottage though, he did work that included enlarging and updating the bathroom to make space for a double shower, and installing a smart new timber painted kitchen in the open plan living, dining space which is lit from the window to the front and a large electrically-controlled roof light.

The front door which opens directly on street, opens into a tiny lobby and then into the living space. There are two bedrooms, one a single, the other a double which opens out via double doors to the rear patio.

This is a most unusual space, being 14m long ending in pedestrian access, and an area handy for bins and bicycles. This rear outdoor space includes a seating area outside the bedroom, a storage area, a covered section with seating, and steps up to that roof terrace.

Living here, so close to the city centre, many younger owners don’t bother with cars. In walk-in condition, with a D2 energy rating, number 85 Harold’s Cross Cottages is for sale though DNG seeking €350,000.