Why copper is good for you

The metal is able to kill germs quietly, all on its own 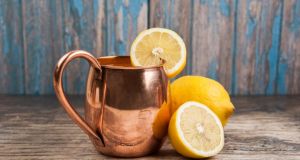 Our ancestors knew a thing or two back in the day, and as a piece of proof (if proof were needed) that not all progress is progressive, just take a look at door knobs.

Brass and copper door handles, as well as push plates, bannisters and taps, may have an elegantly old-fashioned allure, but did you know they’re also quietly killing bacteria?

Yes, there’s something about copper and its alloys that suffocates germs, even the hideously awful MRSA, C. difficile, E. coli and flu. Plastic and stainless steel, on the other hand, are a veritable playground for vile and toxic noxious things. It doesn’t matter if you’re one of those trigger-happy home owners who douses everything with a spray of anti-bacterial cleaner at every sneeze or spill, because the DNA that enables bugs to be antibiotic resistant still survives – but not on copper.

Discovered in the 1890s, it’s called the oligodynamic effect, although it’s clear that many cultures have known about it for centuries.

On a recent trip to India, I was told that you should drink water that had been standing in a copper cup overnight.

This, my new Indian friend told me, was because its Ayurvedic properties were good for balancing your chakras. That may be so, but the copper is also actively sanitising your water.

Silver’s good too, though copper’s quicker. One study showed copper killing off salmonella microbes in water in just four hours, while silver took between eight and 12. Still, this explains the tradition of silver rattles for babies, and silver cutlery – for those who could afford it.

So much for the science bit. Maybe it’s time to dust down the family silver, if you’re lucky enough to have some, and start using it every day?

And if you don’t, get trawling the antique shops and auctions for your new healthy canteen.

Meanwhile, for brass and copper fixtures and fittings, you’ll find ranges from Woodies (woodiesdiy.com) to Knobs and Knockers (knobsandknockers.ie).

Isn’t it a lovely thought, as you snuggle down for the night, to think of your door knobs gently disinfecting themselves while you sleep?