Where have all the religious pictures gone? You don’t want to know

The quintessential homestead had an open hearth, the glow from the Sacred Heart and a picture of JFK 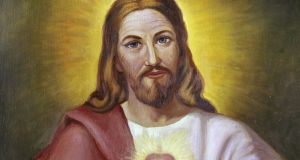 Unless you have been living under a rock for the last few weeks it cannot have escaped your attention that Pope Francis is here, now, on an official visit. Or perhaps by the time you are reading this he has already left, his visit having barely registered a ripple on your radar.

So it was for me back in 1979 for the Pope John Paul II visit. Despite attending a convent school, that papal visit went unnoticed by me. I was nine years old and we had just moved house so I had other things on my mind. However there must have been an upping of the ante from the nuns in school as the date for the visit came nearer because I do remember digging out rosary beads (from my private collection) to drape around the hall table in a bid to compensate for our woeful inadequacies on the religious front.

Not that the houses of my peers would have been any better in this department. Back then there was a strong urban-rural divide with religion undoubtedly having less of an influence in certain Dublin constituencies than around other parts of the country.

But Dublin was not representative of the national picture and despite some Dublin constituencies voting progressively for instance in the 1983 and 1986 abortion and divorce referendums, Ireland in 1979 was still a deeply religious country and homes obviously reflected that.

That image of the quintessential Irish homestead, an open fire burning in the hearth, the red glow from the sacred heart picture above in one alcove and a picture of John F. Kennedy or perhaps a previous pope in the other would be a pretty accurate reflection. It would not have been unusual to see pictures of popular saints adorning the walls, St Francis, St.Anthony, Padre Pio, (Don Bosco anyone?) not to mention the obligatory crucifix and statue of Child of Prague in the window.

Nowadays Irish homes barely come with a hearth never mind a sacred heart. Open fires have largely been replaced by stoves and it would be hard to imagine anyone hanging a picture of a saint on their walls. As a nation we have become more secular and so have our homes. These days it’s all about #me.

Walls are more likely to be decorated with photographs of you walking the Camino Way rather than a picture of the actual saint (Saint James as it happens) whose remains are said to be buried there.

You are as likely to see a picture of St Francis or Padre Pio on a wall in an Irish home today as you are to see a portrait of the current president of the United States #POTUS glowing orange in your alcove (unless of course you live in Doonbeg #itsgonnabegreat).

One semi-religious work of art which has stood the test of time is the painting by French artist Jean-François Millet depicting two peasants with their heads bowed in prayer for the Angelus as they stand in a field, a basket of potatoes at their feet.

You can see how this one would resonate here. And it is a strikingly simple, even poignant piece of art. Another artefact which still holds its own today is the Child of Prague. An icon so odd it has nearly achieved cult status in a kind of Father Ted way probably due more to its weather related skills and sheer weirdness more than anything else.

Some modern day households say they do own a holy water font (usually given as a gift from a hopeful elderly relative) but in all cases (according to my extensive research) said font has failed to actually make it on to a wall.

We had one once (a house-warming gift from my mother in law) which visitors often suspected may not have been dispensing the holiest of blessings (think Fingal County Council) and this despite the never ending supply of 7-Up bottles full of water from various holy places courtesy of same mother in law. (Note: any babies in the Special Care ward of Limerick’s St Munchins Maternity Hospital in early August 2000. You have benefited unbeknownst to you, from liberal splashing of Knock Holy Water when my first born was sojourned there and was visited by a concerned granny).

So if no longer on our walls or mantle-pieces or window sills, where have all the crucifixes, sacred hearts, statues, pictures, medals, rosary beads and holy water fonts gone?

Have they been consigned to the bin? You might want to check out your attic if you have one. There could be lots of surprises roosting up there. A box of Our Lady of Fatimas perhaps? How about a lovely bust of Pope Pius II? Yes these are the things that people discover in attics upon taking ownership of a new second hand home.

And after decades of brain-washing on the perils of non-belief, new owners who don’t want to risk eternal damnation (fair enough) end up leaving them up there, lurking in the attic like an Irish version of Toy Story (I’d like to see that), freely intervening on behalf of their new owners wherever they see fit. And there was you wondering how the roof tiles stayed on during Hurricane Ophelia. Now you know, plenary indulgences from above #carefulnow