Where have all the good (trades)men gone?

Arlene Harris: Is everyone too busy to do small jobs, or are they just not bothered? 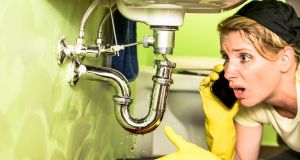 Steer clear: you may run into trouble with insurance companies if anyone other than a qualified plumber worked on your water pipes

We’ve all been there – a leaky pipe, a blocked gutter, a damaged fixture or fitting – these are the small jobs which shouldn’t take more than an hour but, because of the simplicity of the task, finding someone to commit to it can be difficult.

We moved into our house almost 15 years ago, and due to the wear and tear you get with three lively sons there are quite a few areas that need attention. I can remember the boom times when finding a tradesperson to tackle a small job was like winning the lottery – it simply wasn’t worth their time.

Then came the lean years when homeowners had their pick of people (many vastly overqualified) who were more than willing to replace broken tiles, repair a sill or a seal or even climb a ladder to clean out eaves and guttering.

If experts are to be believed we are headed towards another global financial crisis and if the dearth of enthusiastic tradespeople is anything to go by it may be sooner rather than later.

I’ve had my fair share of “we’ll be round on Tuesday” conversations where I’ve been waiting for weeks on end to discover which Tuesday they were actually referring to – and I don’t believe I’m alone.

Friends and acquaintances are increasingly frustrated as they are told jobs “are too small” and there wouldn’t be anyone available for weeks to “give an hour of their time for the sake of €100”.

What’s going on? Is everyone in the construction and maintenance industry simply too hectic to undertake small jobs for little profit or can they just not be bothered?

Some say they are genuinely too busy to commit to small jobs as it can mess up their schedule, while others, like Kevin Currid, who runs Jobbers – an odd job company servicing Clare, Limerick and Galway – say it’s the small jobs which lead to big ones, so he would always endeavour to carry out any task, even if it’s something as simple as hanging a few pictures.

But the Ennis-based tradesman says a good way to entice someone to do work is to have a few nixers stacked up which might encourage a more enthusiastic response.

“It may be a good idea to store up a few non-urgent jobs and get a quote which would require a day’s work for a tradesman,” he says. “And it can also be cheaper to do it this way rather than by the hour.”

A friend recently did just that – she waited weeks to get someone to fix a broken window sill, but when she decided to add gutter cleaning and window resealing to the list it proved effective, with several workers willing to commit to the job.

The alternative to making up work for people to do, of course, is to try to do as much as we can ourselves, knowing that it will be quicker in the long run.

I’m a dab hand at painting and have pretty much done the entire house interior at some point or other. The same goes for hanging curtains, banging nails into walls for pictures, mirrors and the like, and I can even do a bit of simple plastering if need be. Yet, hand on heart, I wouldn’t have the patience for anything more complicated.

Luckily my other half is more determined, and will stick with something until he gets it right – he’s also a lot better at preparation than I am as I tend to be of the “I’m just getting on with the job and have no time for masking tape” school – so luckily anything which requires precision or patience he is more than happy to take over.

And here is where online tutorials come in handy as there is literally a lesson for everything to be found somewhere on the internet. Obviously it’s important not to go rewiring the house after a five-minute tutorial from an electrician in Iowa, but there are some jobs which can be undertaken by anyone with the time and dedication to make sure it is done right.

And while safety is the number one issue when taking on DIY jobs, Kevin Currid says doing a job yourself could also lead to problems with insurance policies.

“I would strongly advise avoiding any plumbing or electrical repairs. If there is ever an issue down the road you may run into trouble with insurance companies if anyone other than a qualified tradesman interfered with them – and it’s just not safe, no matter what YouTube tells you.”

Looks like I might need to return that voltage detector pen and adjustable basin wrench and stick to painting walls and sealing cracks.

Coronavirus: Where should you sit on a plane to avoid infection?
9

Why I’ve fallen out of love with American politics
10

Escape to the chateau: The Irish buyers with grand designs on French living
Real news has value SUBSCRIBE