Ruth Maria Murphy honed her photography skills on travel assignments. Now Ireland’s most beautiful homes are in her sights 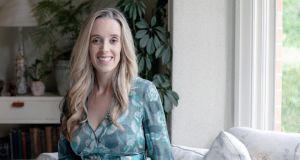 In her own interior shot: Ruth Maria Murphy at home in Malahide

Ruth Maria Murphy gets inside all the right houses. As one of the country’s leading interiors photographers, her work appears in Image Interiors and the Gloss as well as international titles such as Marie Claire, Lonny and Architectural Record. She spends her time assessing homes that might ultimately end up in glossy spreads, juggling requests from architects and interior designers to photograph their work with demands from editors for new homes to feature.

“What catches my eye is a certain sense of style that is real, not copied, borrowed or bought. It is very hard to put it into words,” Murphy says. “You have to look past filters and detail shots to see what is there – colours, patterns, shape. You know if something is of quality.”

Irish people used to be notoriously private about their houses so how does she find homes that go on to be featured in magazines? “My Instagram feed has been great for potential home-owners getting in touch.” Interior designers and architects let her know about projects they are working on, but ultimately the owner has the final say as to whether their space can be photographed. Meanwhile, glossy magazines are constantly looking for photo stories to fill pages.

It’s like working with a model in a fashion set-up, where the make-up artist builds a look. I’ll have figured certain compositions and then I build and layer each

Murphy’s job requires the diplomacy skills of a seasoned politician. How do you delicately tell a homeowner the kitchen table covered with oil cloth that they love isn’t going to make the cut?

“Some houses have it, but more often than not certain elements will need to be rejigged to build a shot. I like to advise on how to prepare for the shoot and I go to view as many projects before the shoot as is possible. I will also inform [the owners] that we may move some pieces of furniture and accessories about, that we might need a piece of art here, a plant there. It’s like working with a model in a fashion set-up, where the make-up artist builds a look using his or her brushes. I’ll have figured certain compositions and then I build and layer each.”

That said, Murphy loves simple shots – beautiful, serene images that may just need some fresh flowers in a vase or a candlestick.

How does she bring a home to life? In the living area of an home owned by an Italian woman married to an Irish man, where walnut beams form the shelving, Murphy styled the room and the bookshelves, borrowing leather pieces by Garvan de Bruir and had the artist Andrea Flanagan lend her a piece to make the far-right corner of the shot pop. In the kitchen, she sourced the marble directly from Italy.

In the period living room of Colm Doyle of DMVF Architects, a lot of what’s on show “was begged, borrowed or stolen from other parts of the house to make it look more lived in”. It was her second time to shoot the house. The first photographs presented it as a more architectural space, but this particular client wanted it to look more lived-in, Murphy explains.

The owner of a copper-clad kitchen had travelled extensively and had an interesting collection of PET lights over the island – made from PET plastics by artisans using traditional weaving techniques, the lights, and other similar products, provide an income stream to weavers in the developing world.

The dining room of a Victorian home features a table with a base made from industrial machinery. Its owners run two of Belfast’s most interesting interior stores, On the Square Emporium and Refound. Both treasure troves are situated within the same building. There were talking points throughout the whole house – for example, the kitchen cabinets are made from weathered barn wood – but they knew when to leave it as is and when to inject more personality into the space, Murphy explains.

In a sitting room in Sandymount by Optimise Design, a double-fronted gas fire is a peephole of sorts and lets you to peer into the next room from the comfort of your armchair.

In another living room that Murphy loves, a copper-fronted mirror, commissioned by interior design consultancy Dust, fits with a bold geometric rug underfoot while respecting the original space.

Murphy says Irish homeowners have become bolder in their colour choices and believes firms like the aforementioned Dust and Roisin Lafferty of Kingston Lafferty Design really get their clients on board.

One of her favourite places to shop is Killian McNulty’s warehouse in Oberstown, outside Lusk in north Co Dublin, where he runs his two businesses, Mid-Century Online and The Vintage Hub.

It’s all about composition in photos, about combining colours, textures and shapes, as well as art, Murphy says. “Art starts a conversation. It evokes a feeling. Buy good art and have it well-framed. It draws the eye and gives you great pleasure.” Vue, the affordable art fair, and RHA’s summer show are just two places to hunt for new work.

And plants. You can’t have enough, she says. “Everyone knows me for my greenery. Buy interesting plant pots and enjoy them. You’ll find good options at Apassionata, Plant Life, The Garden in Powerscourt and Ginkgo Flowers, all Dublin-based shops. You can also find some great ones in local garden centres.”

Murphy got a job with an adventure company, where she travelled the world, documenting each day with a film crew

Murphy credits her formal education with helping pave her way to success. A graduate of the visual communications programme at NCAD grounded her concept-generation and taught her how to take an idea from concept to execution.

When she qualified, she went into business with one of her classmates, Jonathan McGonnell, offering a full design service. McGonnell is now best-known for his production design work which includes several TV series, including Peaky Blinders.

And although photography played a role in Murphy’s work, it would take several more years of work experience for it to take centre stage.

She left Ireland for Toronto at the height of the Celtic tiger and got a job with an adventure company, where she travelled the world, documenting each day with a film crew, navigating the full length of Vietnam, much of Morocco and on safari in South Africa.

“It was a bucket list of sorts and I was getting paid for it,” Murphy recalls. It required her giving her all to get the shot – jumping into rivers, carrying her cameras on her back across desert and jungle, and having to improvise when the equipment seized in the intense humidity. One standout moment was in a shanty town in the kingdom of Swaziland where she and her team saw the ‘lobola’, or bride price, a dowry paid in cows that is a custom in many parts of the world, being offered. “A cow was sacrificed and all its parts strewn all over the village – there were women boiling blood in one corner, and a group of men with the head in another.”

The on-the-hoof approach both steeled and schooled her and has given her work an edge. It was her love of interiors and architecture that secured Murphy her next job, as studio manager of hip Toronto-based outfit Superkül Architects, where she also did shoots for the company, as well as working as a freelancer.

She came back to Ireland in 2014 because she missed her family, and then started showing her portfolio around and getting commissions.

In a word-of-mouth industry, the work spoke for itself. Murphy’s first big job was to shoot the work of Kilkenny-based master jeweller Rudolf Heltzel and to work on an exhibition to celebrate the firm’s 50 years in business, which travelled on to the Palais Maeterlinck in Nice.

She then worked with interior designer Suzie McAdam on imagery for a restaurant; a commission from Image Interiors followed as did numerous commissions from architects and designers.

The best homes excite you, she says. “They look and feel different when you go in. Brave choices are being made. What they all have in common is that when you walk in, you get a feeling of excitement. It’s a feeling I get the minute I cross the threshold.” ruthmaria.com