What is the going rate for a home in ... Co Waterford? 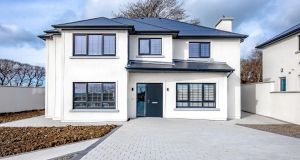 Sherry FitzGerald Rohan is seeking €390,000 for this substantial four-bed house at Arbormount in Ferrybank.

Given that it’s the oldest city in Ireland, pre-dating Dublin by 74 years, Waterford could, if it wanted to, lay claim to being the rightful capital. Steeped in history from its establishment by the Vikings in the ninth century, the city and the surrounding county have plenty to offer when it comes to homes to suit those on every step on the property ladder.

While the residential market is “challenging” at the moment according to John Rohan of local estate agent Sherry FitzGerald Rohan, he says there had been “good activity and a lot happening” right up until the Government’s imposition of Covid-19 restrictions in March.

Rohan is optimistic for the future, however, and points to plans by local builder, Cosmo Developments to start construction on 77 new houses in the Kilbarry area once the current lockdown comes to an end.

Outside Waterford city, Dungarvan-based agent Denise Radley says the market in her area is “very strong” with a “high demand for quality homes”.

She says: “ The first-time buyer is very active, with a lot of tenants wanting to purchase their own homes, as the mortgage repayments in some cases are less than the rent they are paying every month.”

Radley also points to a “large segment” of cash purchasers from the United Kingdom and farther afield looking to retire to Dungarvan.

Árd Álainn, Sherlock Walk, Gracedieu
Those looking for a new home in Waterford city itself may be interested in the two remaining houses Sherry FitzGerald Rohan has for sale at the Árd Álainn scheme in Gracedieu. Priced from €240,000, these three-bedroom terraced properties are A-rated and extend to 121sq m (1,302sq ft). The houses have energy-efficient air-to-water heating systems, and large front and back gardens as well as off-street parking. The Árd Álainn estate is well located in terms of local amenities which include the Waterford Greenway. The scheme is situated just off Gracedieu Road and within a short drive of Waterford city centre and major employers including University Hospital Waterford, and pharmaceutical companies such as Sanofi and West Pharma.

The Sycamores, Dungarvan
There are a range of three- and four-bedroom houses available for sale through Radley Auctioneers at The Sycamores in the coastal town of Dungarvan. Priced between €272,000 and €295,000, all houses within the scheme carry an A2 energy rating and have NZEB (Nearly Zero Energy Building) certificates, making them eligible for a “green mortgage”. These allow the purchaser to avail of fixed interest rates of as little as 2.5 per cent for up to five years. The houses at The Sycamores have underfloor heating at ground-floor level, demand-controlled ventilation systems and CAT 5 cabling in each room. Outside, the properties are wired for electric car charging points.

Radley says there are 12 three-bedroom semi-detached houses and one four-bedroom semi-detached house remaining at the scheme. The three-beds start at €272,000 while the four-bed is priced at €295,000. The Sycamores is a bespoke development of 63 houses and is well located beside the Fraher Field GAA pitch and within a short walk of Dungarvan’s estuary and the hugely-popular Waterford Greenway.

Arbourmount, Rockshire Road, Ferrybank
Agent John Rohan of Sherry FitzGerald Rohan is seeking €390,000 for a substantial detached four-bedroom house extending to 208sq m (2,239sq ft) at the newly-developed Arbourmount scheme in Ferrybank. Located just 2km outside Waterford city centre and immediately adjacent to the exclusive Rockshire Road in neighbouring Kilkenny, the scheme will upon completion comprise a total of 29 A-rated houses sitting on individual plots of 139sq m (1,500sq ft). There are four four-bedroom detached properties available for sale in the first phase of the Arbourmount scheme.

25 Abbey Gardens, Abbeyside, Dungarvan
Empty nesters looking for a more manageable living space that’s in walk-in condition may be interested in number 25 Abbey Gardens. Located in the heart of the established residential area of Abbeyside just outside Dungarvan, this newly-built semi-detached bungalow extends to 84sq m (904sq ft) and comprises two bedrooms, two bathrooms, livingroom and kitchen. Available for sale through local agent Brian Gleeson Property at a price of €220,000, number 25 offers the downsizer the opportunity to secure a new home while freeing up equity from the sale of their existing property.

Developed by well-known local family builders, Carey Homes, the Abbey Gardens estate is situated just off Clonea Road and within a short walk of the Waterford Greenway.

213 Maritana Gate, Waterford city
Those looking to secure a steady return on their investment in the prevailing low interest rate environment or to provide for their pension in retirement may be interested in an apartment Manor Properties has brought to the market at the Maritana Gate development in Waterford city.

Located at the heart of the city centre, the property is guiding at a price of €120,000 and comprises two bedrooms with en suite bathrooms, a fully-fitted kitchen, lounge area, entrance hall, and a balcony. This apartment is in turnkey condition and would be suitable for letting to both the professional and student accommodation market.

30 Seacliff, Dunmore East
Agent DNG Reid & Coppinger is seeking a price of €180,000 for a holiday home on the grounds of Dunmore East Golf Club. Located within the established Seacliff scheme, and just a short walk from the ever-popular seaside village of Dunmore East, the property extends to 92sq m (990sq ft) and comprises three bedrooms one of which is en suite, a kitchen, open-plan living and diningroom, bathroom, WC, and entrance hall. Prospective purchasers should note there is an annual management fee payable for the general upkeep of the Seacliff scheme. In 2019, this fee amounted to €1,000. Owners of the Seacliff holiday homes have access to the facilities at Dunmore East Golf Club.