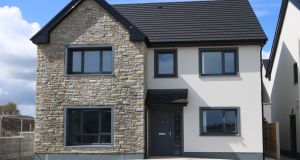 This detached house at Coppenger Fields in White’s Cross, near Cork city is seeking €435,000

It’s the nation’s second city after Dublin, and Corkonians would argue it’s the real capital of Ireland. Certainly the presence of US tech giant Apple, a number of the world’s biggest pharmaceutical companies and a strong local economy is reflected in the residential property market in the city, suburbs and as far afield as the internationally regarded coastal village havens of west Cork.

When it comes to the city centre, apartments are the most popular buy for both investors and owner-occupiers, O’Flynn says, while first-time buyers and movers seeking family homes tend to gravitate towards established suburbs such as Blackrock, Glanmire, Montenotte, Sunday’s Well and Douglas.

Coppenger Fields, Dublin Pike, White’s Cross
First-time buyers and those trader-uppers looking for a fuss-free move may be interested in the four-bedroom detached houses on offer at Coppenger Fields, a new scheme comprising 74 homes in White’s Cross. Extending to 166sq m (1,787sq ft), this A-rated property is priced at €435,000 and comes with underfloor heating at ground-floor level, a choice of fitted kitchen, and a fitted stove. White’s Cross itself is located within 6km of Cork city centre via the R614, making it convenient for those commuting for work or for recreation purposes.

Viewings of the houses at Coppenger Fields can be arranged by appointment through the selling agent Coldwell Banker Carlton Estates.

Dromard, Willsford, Douglas
Savills’ Cork office is seeking €625,000 for Dromard, a detached four bedroom house extending to 288sq m (3,097sq ft). Located within a 10-minute drive of Douglas village and about 16 minutes from Cork city centre, this property briefly comprises four double bedrooms, an open-plan kitchen/dining/living room with utility and study room. The house is set within extensive grounds, the main feature of which is the landscaped rear garden.

11 Blackrock House, Blackrock
One of just 26 apartments within this exclusive gated development, number 11 Blackrock House is a spacious one-bedroom apartment extending to 71.5sq m (770sq ft). This is the first property to come for resale since the units in the scheme were brought to the market in 2016 by Dublin-based developer Michael Roden’s Merrion Property Group.

While an examination of the Property Price Register shows the apartment sold originally for €240,000 in 2018, this time round it is being offered at an asking price of €300,000 by Lisney. Number 11 comprises an entrance hall, kitchen/dining/living room, utility room, bathroom, double bedroom with built-in wardrobes, with 12ft-high ceilings throughout.

Prior to its conversion into luxury apartments, Blackrock House and its surrounding lands had been home since 1820 to an Ursuline convent, and what is believed to be the oldest girls’ secondary school in Ireland.

Blackrock village is one of Cork’s most sought-after suburbs, and is well-located just 6km from Cork city centre.

The White Cottage, Fahouragh, Castletownshend
Agent Hodnett Forde is seeking €345,000 for the White Cottage. Located just 1km from the hugely-popular west Cork village of Castletownshend, 8km from the market town of Skibbereen, and 84km or an hour and 24 -minute drive from Cork, this property extends to 130sq m (1,400sq ft) and comprises two double bedrooms on the ground floor, two bedrooms overhead and an open-plan kitchen/dining/sittingroom.

While the property was only built in 2001, its design takes the form of a traditional west Cork cottage. The property has an oil heating system, private water supply, a septic tank, and is equipped with excellent broadband.

Outside, the house is complemented by a limestone patio, and a large garden leading to a stream at its western boundary. The property also features a treehouse and children’s play area.

The village of Castletownshend sits on the north side of Castlehaven harbour. Developed around the castle built by the Townsend family in the 1600s, it offers a number of attractions including the award-winning pub and restaurant, Mary Anne’s and Saint Barrahane’s Church Castletownshend.

The graves of cousins Dr Edith Somerville and Violet Florence Martin are to be found in church’s graveyard. Better known as Somerville and Ross, the pair famously wrote The Irish RM. Set in west Cork at the turn of the 20th century, the humorous series of books detailed the misadventures of a local Irish resident magistrate.