Move to the country: Leaving Dublin was the first big decision but as the search starts, other hard choices loom 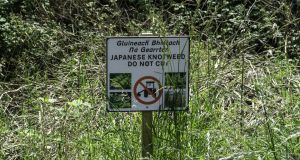 ‘It is testament to how little I know about the property market that I had never before heard of Japanese Knotweed.’ Photograph: iStock

Ignorance is bliss. To a certain extent this is true. I have had a prolonged and intimate relationship with ignorance and I am, for the most part, happy.

There comes a time, though, when the once glorious lack of awareness becomes a rusty anchor tied to your ankle, dragging you inexorably down to the bottom of Lake Things I Really Should Have Known.

In such times ignorance can be hobbling. Consumed by a feeble powerlessness, you stumble through the darkness. So far that’s what buying a house is like.

As we stood outside the front door waiting for the estate agent, we heard a strange sound

We are at the beginning of what I now suspect will be a very long road. But the decision has been made: we are leaving Dublin and moving to the countryside. That’s surely the hard part, isn’t it? In one sense, yes. It’s a big step, bridging that gap between a daydream and reality.

In another, even more real sense, however: no. The hard part is actually buying a house. Who knew? We didn’t.

It all started so well. In a flurry of nervous excitement we spent a week browsing houses online. We have a very limited budget, which is making the selection of possible future homes unexpectedly easier than it might otherwise be. There are not many houses currently available that fit our criteria, so at least we don’t have to deal with that particularly draining phenomenon known as “overchoice”. You have to look at the positives.

So we browsed and the experience began to feel more real. We saw a house with potential. Until you are buying a house you will never think about or use the word “potential” quite so much. This room has potential. That cowshed has potential. That muddy hole in the ground is literally oozing potential. When I look in the mirror I see potential.

Believe me when I say – this house had potential. Well within our budget, it looked like something straight out of a Jane Austen novel. A grand old dame of a house, surrounded by two acres of verdant woodland. A doer-upper for sure.

With kids and picnic packed, we headed south for a viewing. During the hour and a half it took to get there, we let all that potential go to our heads. I mean, we really got ahead of ourselves. We pictured idyllic summers in the garden with bunting and cocktails. We thought about guest rooms and colour schemes; we envisaged the library we’ve always wanted and playrooms for the kids. We saw it all.

And then we actually saw it.

As we stood outside the front door waiting for the estate agent, we heard a strange sound; a dull, squelching thud. Nothing to worry about; it was just the sound of both our hearts dropping in bitter disappointment. We didn’t have to say anything – when you know, you know.

It was barely a house. I’m sure at one point it was, but now it looked like the set of a low-budget horror film. I kept expecting a rabid badger to scuttle out of one of the cobwebbed corners. It was, and this is the only fair way to describe it, derelict.

About 10 minutes prior, we had taken a wrong turn and ended up outside the neighbouring farmhouse. After kindly pointing us in the right direction, we asked the farmer if he knew anything about the house for sale next door. “Well, it’s not haunted,” he said encouragingly.

On top of significant structural damage, there was also the problem of Japanese Knotweed. It is testament to how little I know about the property market that I had never before heard of Japanese Knotweed. Based on conversations I’ve had since, I may be the last person in Ireland to discover this fascinating plant. Did you know it can grow through tarmac and concrete?

Or that the UK’s environment agency describes it as the country’s “most aggressive, destructive and invasive plant”? Or that it’s basically impossible to kill? Or that you can have serious issues with planning permission and insurance if it’s found growing close to your house?

It turns out this possibly-not-haunted-but-definitely-derelict house was absolutely riddled with Japanese Knotweed. Huge bushes of the stuff bloomed throughout the grounds; some of it perilously close to the house itself.

I have a lot of respect for a plant so resilient and dogged, but I’ll be happy if I never see it again.

Thus ended our first viewing, and we learned an important lesson: if something looks too good to be true, it’s too good to be true. A lot of pennies dropped for us that day. For a start, the photos we saw online did not reflect reality. They were downright misleading. Of course they were. How could we be so naive? We were what carnival folk might term “rubes”. Saps. Suckers. Easy marks.

But it was a valuable experience. We’re slowly getting street smart. This week we learned about Japanese Knotweed; next week it’ll be septic tanks and water tables no doubt.

Our optimism prevails. We know we will never buy our dream house, but we’ll buy one we can afford and in a few years turn it into our dream home.