George Michael revealed in artworks by Hirst and Emin 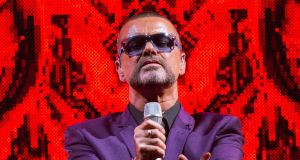 The art collection of George Michael – the late singer, songwriter and music producer, is on an extensive world tour, including an exhibition in China, where Wham! – Michael’s first band – played two ground-breaking performances in 1985, making them the first western performers to do so.

The collection will subsequently be auctioned by Christie’s in two parts: the flagship pieces at its London headquarters on March 14th and the lower-value items through an online sale, March 8th-15th.

The highlights of the collection, which feature the expressions of the Young British Artists from the 1990s – known for their shock tactic artworks, mimic the life and legacy of a man who sold more than 115 million albums. He died from heart and liver failure on Christmas Day, 2016, aged 53.

The work comprises a single white dove suspended – as if in mid-flight, in a tank of formaldehyde.

Though his boyish good looks, permanent tan and bleach-blond hair turned him into an overnight sex symbol to screaming teenage girls, for years he hid his own sexuality. He was finally exposed when caught and prosecuted in 1998 for engaging in a sexual act by an undercover police officer in Beverly Hills. In an interview with Desert Island Discs, he said hiding his sexuality had made him feel “fraudulent”, and that being caught soliciting sex in 1998 was a subconsciously deliberate act. It was not until 2007 that he admitted he had hidden his homosexuality for decades to protect his mother, Lesley Panayiotou.

This work is a rethink on the traditional martyr, where Hirst uses a bull in place of the saint – bound in a steel cage and pierced with dozens of crossbow bolts and arrows.

In 2005 the singer opened up about his 12 years of severe depression after the death of his partner Anselmo Feleppa from an Aids-related illness in 1993, and the death of his mother three years later. “In terms of coming close to saying I don’t want to live, that would have been after my mum died, there was so much death around me, I can’t tell you,” he told the Guardian.

Drunk to the Bottom of My Soul

An applique blanket with embroidery said to cover the theme of love and loss.

Michael, who died the same year as two other music icons, Prince and David Bowie, had his battle with drink and drugs well documented in the media. He avoided London for a year, drinking his way from Los Angeles to Australia to avoid meeting friends and family. In 2006 the singer was found slumped over the wheel of his car, and in 2010 received a prison sentence and driving ban for driving under the influence. Elton John, who described George Michael as “the kindest, most generous soul and a brilliant artist”, has spoken many times about how he tried to intervene with Michael’s addictions. He told Channel 4 News: “I tried to put my arms around him, I tried to help, but you can’t help people who don’t want to help themselves.”

A kaleidoscope of colour through the use of real butterfly wings.

It was not until after his death that the extent of the singer’s philanthropic work became evident; he had worked anonymously at soup kitchens, provided millions to Childline and made an abundance of secret donations to help the less fortunate.

Having rich associations with childhood and living life to the full, butterflies – used here in Hirst’s work, are also symbols of freedom and escape. Perhaps, in the lyrics of his song Freedom “It looks like the road to heaven, but feels like the road to hell”, George Michael has finally found peace from this mortal coil.

Proceeds from the singer’s collection of kitchen sink realism to the darker themes of death and loss, go to continue his philanthropic work and charities. christies.com