This might be the perfect pad for lockdown living 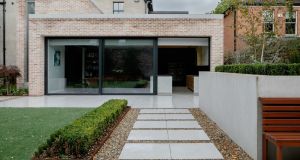 Beneath the calm exterior of a two-storey redbrick in D4 is a host of high-spec tech that makes the listed building feel warm and modern with much of its atmosphere painted in using a selection of lighting techniques to create light and shade.

The discreet refurbishment by Declan O’Donnell of ODKM Architects features underfloor heating throughout and the place is washed in light. Behind its smooth, plastered walls and timber and concrete floors lie 18km of CAT6 and coaxial cables, installed to run its smart heating and Creston lighting systems as well as an AV system that allows its owners to run their businesses from its home office and boardroom, useful extras that, with the current health crisis, might make it the perfect pad for lockdown living.

It measures 350sq m and O’Donnell says there is plenty of space and plenty of rooms to escape to. “There is also tonnes of light.”

O’Donnell uses roof lights and walls of glazing to wash his spaces in natural light, a feature that during the day brings the house to life. But this property has a dual personality; its second psyche only reveals itself after dark.

This night-time personality is the result of a bespoke lighting scheme, now a fundamental part of every design, O’Donnell says. “It’s about using light to create shapes to make the house come alive at night.”

The simple flick of a button on a device transforms the mood, creating a more theatrical atmosphere, says Patrick Kerr of Shadowlight, the designer who created the system, one of two distinct layers of lighting within the property. It’s an approach stylists use to dress to impress, using subtle undergarments to help highlight the form in the home: this is the technical lighting required to perform tasks within the property, from subtle recessed wall spots directed to illuminate surfaces to a dimming system, that is remotely operable using a smart phone or tablet, decluttering walls of banks of switches.

“Within an open-plan space it means that while you’re working in the kitchen you can have some ambient light on in the dining and/or sitting areas so that you’re not looking out to darkness,” Kerr explains.

“When dimming lights in one area it should happen so discernibly slowly, over the course of about 10 to 15 seconds that you don’t notice the lighting has lowered but rather that the atmosphere has changed. It immerses you in the mood, in a discreet but theatrical fashion,” he says.

There are obvious security benefits to such a dimming system too – you can switch on lights at different times while not at home but it also means that if you discover you’ve left a light on downstairs and are already in bed then all you have to do is go to your device to switch it off, the essence of modern luxury.

By employing a second layer, what Kerr calls concept lighting, it allows you to install look-at-me lighting that makes as much as a statement as the furniture and furnishings do.

In the interconnecting period reception rooms where minimal repairs were required to the cornicing and ceiling roses, pendant lights are used to flatter these decorative details. Kerr selected a design called Hope by Luceplan for a modern take on the traditional chandelier. The fixture features polycarbonate discs that act like the fresnal lens developed by French physicist Augustin-Jean Fresnel for use in lighthouses. This widens the light beams to show off more of the room. It is available in several sizes in these rooms. Where the ceiling heights are over 12 feet, he’s installed the 90cm-wide pendant.

In the same rooms the owners wanted to highlight two artworks on the walls. Kerr suggested a pair of floor lamps, Mosaico by Via Bizzuno, set in opposing corners of the rooms. Each has three spots, two of which have been directed to highlight the artworks, while the third softly illuminates the room. These lamps also have an LED strip along the stem that casts a decorative beam up the wall.

In the darkly panelled study, a gold pendant, Discoco by Spanish brand Marset, casts a beautiful pattern while Corrimano by Via Bizzuno is an anodised aluminium fixture that mascarades as a handrail lighting the oak staircase, the board-formed shuttered concrete stairwell, one of may details by contractor Fordlin Construction, and the sleek smoked glass balustrade that leads down to polished concrete floors by PMac. The sizeable house has an air-to-water heat pump and a back-up boiler to efficiently run its old and new parts.

Dean Cooper, a long-time collaborator of O’Donnell’s, is responsible for the kitchen and the use of highly polished brass in both it and master bedroom. In the kitchen, above-counter cabinetry is concealed behind a wall of the metal. It adds warmth and refracts light in a soft and flattering way. A secret door to a utility room and pantry are concealed behind the wenge wall. The island and doors facing the living area are clad in a marble-look Silestone, a material that is light enough to be able to use on unit doors while on the work side of the kitchen the unit doors are made of sawn oak to give them a contrasting textured feel, O’Donnell explains. In the living area a Cinephile sofa, designed by Philippe Bouix, sits across from a pair of Skool chairs by Kolbrún Leósdóttir, both by Roche Bobois.

The use of luxe polished brass is repeated in the master bedroom where a half vertical wall of the metal divides the room to create a dressing area behind the bed head, the kind of smart use of space you usually see in swish hotels. A soft upholstered panel bed and bed head, in an earthy green velvet, the aptly monikered Backstage bed by Roberto Tapinassi & Maurizio Manzoni for Roche Bobois, is set against it. It’s a look that many will want to emulate. O’Donnell borrowed the concept for the master bedroom of his own home.

The bathrooms throughout have a similar atmosphere to the rest of the home. These are not sterile white rooms but rather integrated into the overall mood of the home. Under the granite front steps is an area originally used as a coal bunker. Here it’s been turned into a fully tanked shower room, inspired by hammam. Tilestyle supplied the beautiful Bay of Biscay mosaic tiles, which are flecked with gold, the Porcelanosa Krion Modul basin and Toko brushed brass tap and shower. The lights here are surface-mounted, fully waterproof Oslo spots by Astrolight.