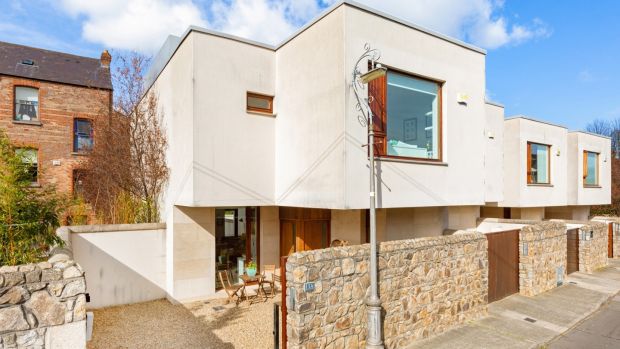 When the owner of 11a Grosvenor Lane, a small secret throughway running parallel to Leinster Road, was single, she wanted a place that was safe to walk home to, had off-street parking and a spare room.

Numbers 11a to 11d is a terrace of four modern mews houses that were built in 2008 to a design by HKR Architects. They show real flair in the layouts and their positioning in a corner garden site that left no house overlooked by the main house on Grosvenor Square.

When launched, the houses, all two-beds, had asking prices of more than €1 million each but timing prevailed and they failed to sell. They were brought back to the market by Nama in 2011 with price tags of €380,000 each. This was when the owner of 11a bought hers, having read about it in these property pages.

It ticked all the boxes for her. “I loved it,” she recalls. For her it was a short house hunt, one of only two properties that she viewed. At the time she paid €401,000 for the end-terrace unit.

In the intervening nine-year period since she moved in, Rathmines has transformed into one of Dublin 6’s chicest neighbourhoods with the Stella cinema, Dunnes food hall and a choice of great eateries on this property’s doorstep.

The owner still loves the 85sq m/914sq ft residence. But now married, with one daughter and a second baby on the way the new priority is more space.

The property opens into a hall with the kitchen to the right, an artfully done, double-height space, that is almost 6.5m high and washed in light. The living room beyond it has a wall of glazing with doors that open out to the northwest facing garden. It has been laid out in artificial grass and features a garden shed where the owner has threatened to relocate to on more than one occasion during the current lockdown.

There is underfloor heating throughout the ground floor with a gantry at the top of the stairs leading to its two bedrooms, one at either end, for maximum privacy. Both bathrooms are en suite; one with a shower room, the other has a shower in the full-size bath.

The bedrooms, both decent doubles, have large picture windows that both warm and wash the rooms in light. Clerestory windows above the gantry bring in even more natural light.

While she entertained the idea of filling in the void above the kitchen to possibly give the family a much-needed third bedroom, the owner felt it would spoil the design of the house. It may be possible to extend out the back slightly but at this stage the family needs more space, and a spare bedroom for visiting parents.

Will this hybrid loo spell the end of toilet roll?