The secret inside Coco Chanel's 1955 handbag

It wasn't Chanel's first handbag, but it became her most famous and most copied 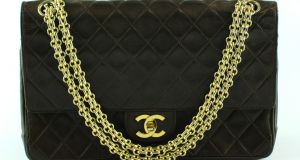 Chanel 2.55: Coco Chanel designed her most famous bag at age 71

It wasn’t Coco Chanel’s first bag – that was her 1929 shoulder bag which was viewed as scandalous with its freedom-giving hands-free design – but the 2.55 has become the French designer’s most popular, and arguably most copied, bag.

She designed it, age 71, as part of her post-second World War comeback and it was immediately welcomed for its versatility – able to be worn casually or at the most formal occasions. It’s also now one of the most investment-friendly bags – a regular at fashion auctions, its resale value is said to have risen more than 200 times in the past 15 years.

For the design she took inspiration from jockey jackets for the quilted leather body, the long shoulder strap is metal with a strip of leather woven through the links and the lining is burgundy – the colour of her Catholic school uniform.

A secret internal zippered pocket in the front flap was designed for love letters. Its modernist name – the 2.55 – refers to the year of its launch, 1955. Chanel was famously relaxed about copying – the modern-day nightmare for high-end brands – echoing Oscar Wilde saying “imitation is the highest form of flattery”.

Róisín Ingle: Even Matt Damon has fecked off back home
10