The business of renting a place in the sun: an Irish woman in Spain 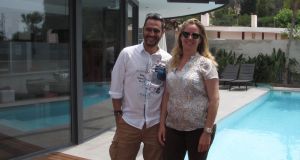 Miriam Burke and her husband Emilio Sierra’s high-end property management business, Utopia Villas, has grown to a portfolio of 24 this year 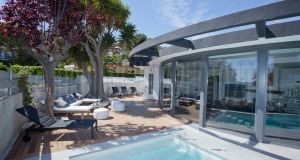 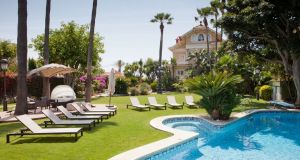 ‘The Spanish do mañana, but we do today,” says Miriam Burke, describing why she thinks their holiday rental business in Sitges, Spain, is growing so well. When Burke, from New Ross, Wexford, and her Spanish husband, Emilio Sierra, from Asturias, thought of relocating to Barcelona, establishing a property business was never on the cards.

After they married nine years ago they travelled around South America for six months. When the calls came from Microsoft to return to work, HR specialist Burke knew she could not go back to corporate life. They had sold their house in Dublin and, with no ties, headed to Barcelona to set up a business. 2007 probably was not the best time to be setting up a smoothie and juice bar, especially when the bank pulled out at the last minute and they had to use their own money.

Fortunately, within a year they were made an offer by a company that wanted to establish a chain of smoothie bars. So they just about got out with their investment. Now, what to do? Baby number one had arrived and, as they no longer had a business, Burke returned to Microsoft, working freelance as a training and development specialist, travelling the world while Sierra oversaw the building of their family home in Sitges.

A chance conversation with a friend sparked the idea of renting the newly built five-bedroom home, Villa Leila, and they themselves moved into a rental. Some friends with a property to rent asked them to manage it, and then some more.

In the first year they had four properties under management and now this year there are 24 on the books of their company, Utopia Villas. Business has grown mainly through word of mouth. Renting has allowed some owners to hold on to properties they might otherwise have had to sell at a loss during Spain’s deep recession.

Early on they decided that Utopia would only take high-end standalone properties with swimming pools and they would offer a full turnaround service. The jewel of the collection is the Villa Isla Cozumel, which was valued recently by Sotheby’s at €20 million. On the Paseo Maritimo, it is a colonial-style mansion and was recently renovated to a very high standard.

At the other end of the scale, four-bedroom contemporary properties rent from €3,500 per week in summer. Utopia provides a full management service to owners. They handle business from marketing to reservation to the check in and out.

There are now 10 people employed and they include a reservation manager, quality control manager, a check-in specialist, a pool technician, a gardener, cleaning supervisor and administration staff. In high season extra people are drafted in to help with check-ins and changeovers.

The other Irish villa is outside Sitges, in the National Park, and has sea views. The owner brought all the furniture and soft furnishings from Arnotts. Guests mainly come from the United Kingdom, France, northern Europe and Russia. American guests usually like to book the bigger properties.

Sierra has brought his experience as an IT consultant in the banking industry to the business and manages the owner relationships. There are three types of agreements.

The first and most common is where the owners pay an average commission of about 25 per cent for managing all marketing, communications, check-in, cleaning and day-to-day maintenance such as pools and gardens. The owner is responsible for infrastructural works and can have use of the property whenever they choose by reserving dates.

The guaranteed income arrangement is where Utopia has full control of the property and manages the utilities and all bills related to the home. Owners have some access out of high season.

The final agreement is where Utopia rent a villa at an annual rent with a clause that allows subletting as a holiday property.

Last year Burke was able to give up travelling and go into the business full time. Turnover was €1.5 million and the projection for this year is to top €2 million.