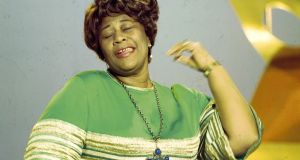 Some years the cherry tree, depending on its humour, reminds me of Ella (Fitzgerald) blooming in a triumphant blaze of dazzling white. Photograph: David Redfern/Redferns

I was planning to do some strimming when my wife said we should plant comfrey. Eager for distraction I looked it up. A bit like a mauve bluebell it’s pretty but not spectacularly so. The Latin name, Symphytum, derives from the Greek words for “plant” and “bone knitting”. In folk medicine it was known as “boneset” and the French term is consoude – meaning to weld together.

My wife has long been an intermittent practitioner of mild healthcare witchcraft. Our two sons and I have often been dosed – sometimes successfully – so I guessed she meant to broaden her skillset. A sport-filled summer beckons for the boys – perhaps she anticipates many fractured limbs.

It turns out that the comfrey is not for our benefit but for the bees. She recently returned from a visit to Bloom, the annual horticultural fest in Dublin, and apparently wherever she spied comfrey she heard the accompanying, almost magical hum of many industrious bees.

Worldwide concern for the diminishing bee population has been a commonplace for years now but we have noticed it on a personal level too. Our acre is not as abuzz as it was. My wife particularly noticed the difference this spring when the big cherry tree blossomed in uncustomary silence.

In London last century I saw Ella Fitzgerald and Nina Simone a few months apart. Ella laughed and filled the Albert Hall with a giddy cascade of joyous sound. Nina glowered and strode about the Barbican making desultory stabs of brief brilliance to pierce the sullen mood.

The cherry tree, depending on its humour, reminds me of both: some years we get full Ella and it blooms in a triumphant blaze of dazzling white. Other years it’s a little bit Nina and all we get are sporadic sprigs of enticing blossom on the otherwise bare branches. This year it was the latter. But there was another absence, an additional subtraction – the comforting, familiar buzz of bees nosing around for nectar was gone. I was away at the time and missed it all anyway but my wife spoke regretfully of the sad lack of what she called that “safe sound”.

Laziness laced with a sense of virtue is extremely agreeable

Alys Fowler in these pages and Margaret Renkl in the New York Times have long been advocating turning lawns into meadows to encourage threatened pollinators. And we have long practised it. We planted an oak in the top corner of the field and each year we let the grass grow long around it. We also leave the hedge up there untrimmed. Whitethorn, fuchsia and elderflower bloom copiously; buttercups, thistles and dandelions abound; it is lush, lovely and totally unkempt but being roughly the size of a smallish front garden it means I have less work to do while the insects thrive. Laziness laced with a sense of virtue is extremely agreeable.

The bank behind the house is similarly untouched. Out of sight from the road, we left it alone. It duly became overgrown, then wild, then derelict. My wife flung down a handful of wildflower seeds a few years ago, and now, white African daisies, blue forget-me-nots and purple vetch are threaded through the heavy-headed grass.

Leaving things to nature pays its own dividends: walking up the bank to the kitchen garden the other day, a warm languorous sun shone on my back and a friendly sonorous buzzing pleased my ears. There were more black and orange blobs nodding in and out of the broad beans, which are in flower. But they were all bumble bees. Their honey-making cousins still seem scarce so although I wish to keep the acre trim I need to strike a balance.

Our boys need space to play football and I take a deep pleasure in strolling through a decent stretch of smooth, fresh cut grass. I also cannot abide the bank along the roadside getting too outrageously hairy. But the orchard and kitchen garden need pollinating so we must have extra enticing havens for the bees.

In attempting to appease my inner gardener along with his naturalist brother I have become less controlling and simultaneously more controlled. Selective mowing is an acceptable concession. It is not really necessary to cut the grass to the very edge of the hedgerow. It is also extremely difficult and slightly pointless mowing neatly to the bark of the fruit trees. I let it go. This tactical surrender to nature is satisfactorily counterbalanced by precision strimming.

Yesterday I tidied the hairy bank with what I thought was admirable dexterity. I cut swathes through course grass and monstrous nettles while swerving delicately around poppies, wild purple stock, pink foxgloves and clusters of sharp green leaves which in July will burst into flaming orange monbretia.

I felt exultant. Then, neatening around the piggery I slashed through a savage looking, unfamiliar weed. The subsequent pungent aroma heralded a dawning realisation that it was no weed but an interesting variety of mint my wife had brought back from Bloom. If I say nothing and leave well alone nature might grow it back.

In Sight of Yellow Mountain by Philip Judge is published by Gill. This summer he will be appearing at The Abbey in Two Pints by Roddy Doyle

Covid-19 summer: It hit me hard when I realised the holiday wasn’t going to happen
4

I think my boyfriend broke up with me because I was diagnosed with herpes. I’m devastated
8