Rathmines townhouse with Sex and the City appeal 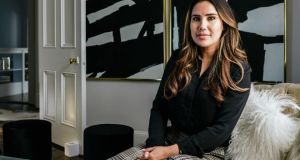 “I bought this house thinking it would be a fixer-upper, and we’d probably move on in five years, but I love it so much now, we might stay forever,” says Catarina Martins of her glamorous period Rathmines home, which she acquired in late 2017.

“It was one of the few properties in the area that had not been subdivided into bedsits and has been a family home since the 1800s, so it didn’t need much structural reconfiguration,” she says. In fact, it was the off-street parking and a large back garden that really sealed the deal for the businesswoman and her family, because as most Dublin 6 residents will attest, “these are rare commodities in the area”.

“My previous home was a new build and it was the showhouse, so it came fully decorated. That didn’t leave me much scope to express my own taste and individuality, so when I got my hands on this property I had a very clear vision of what I wanted it to look and feel like – feminine and opulent yet homely, a space that would function as a family home as well as a base for my work, but I didn’t know how to make it happen, nor did I have the time,” says Martins.

So she called in the experts and Alan O’Connell from OC Architects & Design was commissioned to help modernise the house. As a protected property, the main focus was on restoring as much as possible, insulating the windows and walls, and installing new services.

The only redesigned part was the return kitchen, where O’Connell extended and installed a clever window feature that runs seamlessly from the worktop level right up into the pitch of the roof. This pulls morning light into the room while visually lifting the space.

Once O’Connell had finished the structural work, interiors duo Louise Rankin and Lauren Martin of North Design were called in to inject a little glamour into what Rankin says was a pure white canvas.

“Here we layered up lots of rich textures that would have been of this time – timbers, marbles, brass, gold and glass on top of contemporary chairs, lamps and artwork to keep the balance between old and new. There’s a mix of Swoon sideboards, couches from Karls Furniture, a stunning brass and glass Eichholtz coffee table, Aoife Mullane bespoke cushions, and we commissioned Dublin-based artist Maureen McDonnell of Stone Step Gallery to create some bespoke pieces,” says Rankin.

A home office also has the wow factor, dominated by a striking Theodore Alexander mahogany desk, accessorised by Bert Frank lamps and high-street pieces like the Swoon sideboard and gallery wall prints from Etsy.

The interiors in the rest of the house are slightly more toned down with a pale white-grey palette to allow the period features to do most of the talking.

“We still carried the brass elements and subtle gold details throughout but in a much softer way through trimmings, soft furnishings and artwork,” says Rankin.

Snug as a bug

“The snug room is my absolute favourite part of the house, and it’s Bentley’s too,” says Martins of her Yorkshire terrier, who she says is “the real boss of our home”.

The team installed period-style panelling on the walls and created a room-dividing bookshelf unit to boost the cosiness factor of the snug even more.

“We added soft taupe tones and billowy textures here and the most comfortable corner couch unit ever. There’s a 72-inch TV screen over a huge fireplace, so effectively it’s a very feminine cinema room,” says Rankin.

The hallway was kept white, simple and airy with original dark oak floorboards reconditioned and polished up and white wainscoting added below the Dado rail. A long cowhide-style runner and brass stair carpet rails and brass pendants mirror the metallics and opulence through the rest of the house.

The main bedroom takes the white-on-white theme even further but it avoids being clinical with lots of soft textures, French-boudoir style furniture and shelving units. A set of antique French mirrored wall panels doubles up as a headboard and creates a dramatic focal point for the room.

However, the real showstopper upstairs is Martin’s Sex and the City-style wardrobe, a lifelong fantasy O’Connell helped her to realise by poaching a bedroom from the front of the house and converting it into a bespoke dressing room. With floor-to-ceiling cabinets, a massive middle island unit and shelves to display the designer handbag collection, “It definitely has a Hollywood feel to it,” says Martins.

Despite her Brazilian origins, there is very little South American inspiration in the scheme, “apart from a few coffee table books, there are no Brazilian influences. It’s not that I don’t love my heritage, I just felt the tropical vibe would not translate very successfully to a period home in Dublin 6.