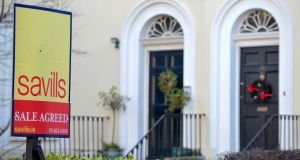 It is understood the firm plans to retain a focus on the “prime” end of the Dublin residential resale market. Photograph: Bloomberg

Savills Ireland has announced plans to scale back its residential estate agency business in Dublin. In a statement on Friday morning, employees were told that the company is reviewing its branch network in the coming weeks with a view to consolidating all residential operations at its head office on Dublin’s Molesworth Street. This is likely to lead to the closure of its Dawson Street, Blackrock and Clontarf branches.

There are currently 24 staff employed in Savills residential network and a spokesman for the firm said that while a number of these will continue to service residential sales, where possible the remaining staff will be redeployed within the organisation. It is not clear whether there will be redundancies. The branch offices are all leasehold.

Meanwhile Savills Ireland employs about 300 people and retains a substantial share of both the commercial property and new homes markets here, with these businesses driving the lion’s share of the company’s business in the Republic.

It is understood the firm plans to retain a focus on the “prime” end of the Dublin residential resale market, ie homes valued at €1 million or more. There are about 90 properties currently on the market with Savills Residential, and the spokesman said these clients will be unaffected by any changes to the resale operation.

In a statement issued to The Irish Times, Savills Ireland Residential said: “Savills is exploring the feasibility of consolidating its Dublin residential re-sales business within the company’s commercial property headquarters on Molesworth Street in Dublin city centre.”

Savills is listed on the London Stock Exchange and employs 35,000 people in 600 markets worldwide. It entered the Irish market in 2006 when it acquired the business of Hamilton Osborne King for €50million. Last year profits at Savills Ireland grew more than 4 per cent to €5 million.

Remember Octomom? She and her 14 kids are doing well
6