Mysterious muses and a river god at Whytes, but tapestry could top 20th century sale

LeBrocquy tapestry once owned by tycoon Tony O’Reilly estimated at up to €60,000 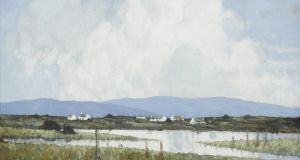 The forthcoming Important Irish Art Sale of 205 lots by Whyte’s auction house, at the RDS on May 27th, will feature a large selection of works by Louis le Brocquy, most notably his Aubusson tapestry Milles Tetes C (Thousand Heads C)

The tapestry was originally owned by Sir Anthony O’Reilly, once reported to have had “the most significant private collection assembled in 20th century Ireland”. Mr O’Reilly was reputed to be the only Irishman to own a Claude Monet painting – Le Portrait, which he purchased in 2000 for €17.8 million.

Included in the sale are eight lithographs, also from the Táin collection, which have an estimate of €1,500–€2,000 each, a screen print Flight (€2,000–€3,000), and a lithographic print Eight Irish Portraits on Words and Watercolours, commissioned on behalf of the Hospice Foundation (€600–€800) offering more affordable works for anyone interested in owning a piece of work by Le Brocquy – considered to be the most important Irish artist of the second half of the 20th century.

The sale also includes a bronze sculpture by Rory Breslin from his Masks of the Liffey series. These sculptures are based on the keystone sculptures by Edward Smyth on the Custom House in Dublin, who was commissioned by architect James Gandon to personify Ireland’s river gods.

Though associated with trade and commerce when they were created for what is considered Gandon’s finest work The Custom House – which took a decade to complete, river gods in Ireland date from pre-Christian times, when rivers were considered the boundary between the real and supernatural worlds.

A relatively new name in the auction market, there has been growing interest in Breslin’s River Gods since 2017 when his Boyne Mask achieved €8,500. A year later in October 2018, his work Mask of the Suir achieved €24,000.

Though his only ocean mask in the series, Atlantic Mask which sold through Morgan O’Driscoll for €4.800 this April, fell short of its lower reserve of €6,000.

Liam Belton, the Irish artist known for his cool tones depicting household objects – almost always with eggs, is also featured with Tswana Gourd Musical Instrument which is listed at €5,000–€7,000.

His work Ten Eggs sold for over its higher estimate of €7,000, achieving €8,000 at the recent Important Irish Art sale by Adam’s on St Stephen’s Green earlier this year. While still a long way off the hammer price of €28,000 achieved for Artemis in 2007, prices for his meticulously detailed still life compositions are rising at recent sales.

“It creates an ambiguous and mysterious mood that seems to define the elusive tone of the post war world,” is how art historian Dickon Hall describes the work of artist, photographer and writer Nevill Johnson’s surrealist work Nurses; one of the few remaining paintings by the artist from his time in Dublin in the early 1950s. (€10,000–€15,000)

Also against a post war backdrop, is Genesis by Colin Middleton, an artist whose work varies wildly depending on what period it dates from. This large (36 by 24in, 91.4 by 61cm) oil on canvas dates from the 1950s when Middleton moved away from landscapes and into abstraction. The striking work is listed with an estimate of €30,000–€40,000.