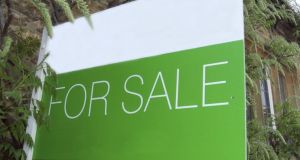 With around a third of all buyers last year located in Dublin, about half of them were first-time buyers.

A total of 42,860 properties were sold in the State last year, a rise of 43.6 per cent from the 29,833 sales recorded in 2013, according to an analysis of the Residential Property Price Register. The study, conducted by property website myhome.ie (which is owned by The Irish Times), found that every county recorded a rise in transactions last year.

Much of the activity revolves around Dublin and the commuter counties. In the first two months of 2015, sales in Leinster accounted for 59.1 per cent of the national total and when Cork is factored in that figure rises to 69.6 per cent – up marginally on the figure for 2014.

The other major urban centres of Galway and Limerick also continued to see their sales grow at the start of this year.

According to myhome.ie managing director Angela Keegan, falling prices (recorded by the Cental Statistics Office in January) should drive transactions to grow further in the months ahead.

“We’ve found transactions for January and February were up about 45 per cent across the board and one of the key drivers for that is first-time buyers with mortgage approval,” Keegan said.

Stock remains an issue for those looking to purchase but the problem has eased slightly.

With around a third of all buyers last year located in Dublin, about half of them were first-time buyers. However, there are only 939 properties for sale in Dublin at the moment at or under the Central Bank’s €220,000 threshold for 10 per cent deposits, with just 502 of these houses.

“The stock in Dublin is on the increase, though. We’ve seen it go up by about a third in the last year and that shows seller are a bit more confident about putting their houses on the market,” says Keegan, adding that prices should continue to level off over the next number of months as sellers become more realistic about what buyers are prepared to pay.