Priced out of Dublin? Consider buying in Drogheda instead 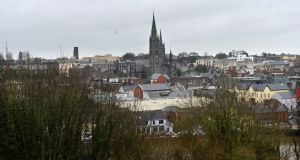 Drogheda, County Louth has a huge amount going for it – and has superb value across all levels of the market. Photograph: Dara Mac Dónaill

Drogheda is underrated. While Meath, Kildare and Wicklow garner more attention in the residential-commuter property-market, Louth goes under the radar somewhat. What this does is open up a county and town of exceptional value, with all the benefits of the more sought-after commuter counties.

The town came into existence in Anglo-Norman times when it was founded as two towns on either side of the Boyne and grew into one of the largest medieval towns across the UK and Ireland – comparable in scale at the time to Bristol and Oxford. Today it’s the largest town in Ireland with a campaign underway to classify it as a city.

But for those willing to take a punt, Louth has a huge amount going for it – and has superb value across all levels of the market.

Those living in the town are divided between Drogheda natives and a growing number of Dubliners who settled in the town during the 1996-2008 boom years, as well as a new breed of Celtic Phoenix settlers, with Gabriel O’Brien of REA O’Brien Collins describing the influx as “like the 2004 experience again in terms of Dublin buyers, but at lower prices”. Those upping sticks from the capital are largely coming from Skerries, Donabate, Swords and Raheny, who are able to “buy a semi-detached family home in Drogheda for less than a two-bed apartment in Dublin”, says O’Brien. The Polish community is also a growing one, with many Eastern European retail outlets in the tow.

That market of migrating Dubliners are generally looking for a family home with a converted attic space – or potential to do so, or a four-bed proper, which goes for circa €285,000-€290,000, the price of a two-bed house in parts of Dublin.

Drogheda’s housing stock includes a wide range of period buildings, from Georgian and Victorian merchant homes in the centre of the town and on the approach roads, through to early 20th century homes that expand out from the Boyne both the north and south. The Celtic Tiger also made its mark with a number of developments – and also single builds on the outskirts of town. Celtic Phoenix builds have been slower to develop – due to the lack of finance generally available to developers over the last five years, but are beginning to come on stream.

Recovery of values in Drogheda from peak time of the Celtic Tiger remain at 60 per cent, as the costs steadily rise, but at the same time represent remarkable value for a town that is just an hour’s drive from Dublin city centre on the M1 motorway. A new build, three-bed semi-detached in the town will cost in the region of €260,000 to €270,000. If one looks at the second-hand market then prices go right down to €200,000 to €225,000.

The Enterprise train that runs from Belfast makes it final stop at Drogheda before Dublin, and takes just 30-40 minutes from Drogheda to Connolly, while the regular train service takes around 50 minutes to one hour – matching the road time on the M1. Matthew’s bus service and Bus Éireann also run the route, making it undoubtedly one of the quickest arteries from the commuter counties into Dublin.

Any new housing developments coming to the market?

The other main development will be Beaulieu Village, which is being developed by Joe Murphy Developments, according to Shane Black of Shane Black Property.

While there are plenty making the commute down to Dublin, there are many employers in the greater Drogheda area. The Regional Hospital – Our Lady of Lourdes – is a major employer, with Carlton Foods, Nature’s Best and Coca-Cola also operating in town. State Street Bank also have offices on the Donore Road in the IDA Building and Technology Park.

In terms of the tech industry, YapStone – the US online payment processing company – are based in Mellview House on the western outskirts of the town centre. Obviously the town would love to attract similar companies to bring their European HQs to Louth. Ebay had offices in Dundalk until their closure last year, which was something of a setback in terms of attracting big multi-nationals. That is not to say that there won’t be others looking to capitalise on the town’s unique position between Dublin and Belfast in the future. A number of large commercial units are available bang in the heart of town, so there could be an opportunity for a savvy CEO.

The food and drink scene in town is vibrant, with a number of outlets as good as any you’ll find in Dublin. Pubs abound: The Grey Goose, Weavers and the Black Bull all sticking out as good spots for a drink. And food is even better catered for. The Eastern Seaboard Bar and Grill,located on the edge of town at the Bryanstown Cross Route, packs a serious punch in terms of class and also value. Catherine Cleary wrote in this paper of its virtues in 2014.

But in the heart of town there are also a huge number of dining options, based around Shop Street and also along the Boyne Riverside. Ariosa serves the best coffee in town, and just opposite Fifty4 Seafood Bar is the place to eat before your espresso. Hurley Bros Grocery Store, on West Street, by contrast, offers a glimpse back to old-school Ireland. Salad plates and rolls are served up in the traditional manner, in a storefront reminiscent of a bygone Ireland.

On the Boyne itself is the D Hotel, Drogheda’s version of Galway’s G Hotel, built on the side of the Scotch Hall Shopping Centre.

These outlets are only scraping the surface of what’s on offer, with nooks and crannies and side streets full of various eateries and outlets. A very under-rated town centre to say the least.

Drogheda is surrounded by green space, but one particular trail stands out from the rest. The Boyne River Walk commences in the town centre and runs out along the river to the site of Battle of the Boyne. Newgrange’s Stone Age passage tomb is also just a 15-minute drive away, while on a totally different note, Funtasia Waterpark is a draw for kids.

The portrait of Drogheda is not all good though. The town centre has lots of plusses, but a large number of empty storefronts and derelict buildings are also visible on prominent streets. What direction the town goes in over the coming years will be interesting to watch: the potential is clearly there.