Former European Parliament president Pat Cox and his wife, Cathy, took the nuclear option and replaced their Blackrock home with a near-zero-energy house 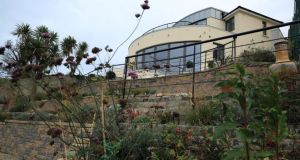 Near zero: Pat Cox and his wife, Cathy, bought the house on Maretimo Gardens East in 1984, mainly because of its panoramic vista of Dublin Bay 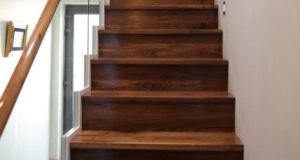 The staircase in the house is lit by a lancet window

Architect Art McCormack remembers “shivering over cups of tea” in the front room of a semi- detached house in Blackrock, Co Dublin, talking to former president of the European Parliament Pat Cox and his wife, Cathy, about what they could do with their cold, draughty home.

In the end they went for the nuclear option, deciding to demolish the 1940s house and replace it with a near-zero-energy building (NZEB) after being assured by specialist passive homebuilder Michael Bennett that it wouldn’t cost the Earth, compared with a conventional house.

They bought the house on Maretimo Gardens East in 1984, mainly because of its panoramic vista of Dublin Bay, but hadn’t lived there for years while Pat Cox pursued his political career in Brussels. Now, they were determined that it would be comfortable to live in long-term.

Superficially similar to the house next door, it was designed to comply with the rigorous NZEB code. Timber-framed, extremely well insulated, airtight and mechanically ventilated, it even has a “wind barrier membrane” to ward off Blackrock’s often savage east winds.

Overlooking a steeply terraced garden that runs down to the Dart line, just south of Lord Cloncurry’s bridge, the new house has bow-fronted windows that bring daylight into both the livingroom and kitchen as well as an extension to the side incorporating new bathrooms.

The whole package is so effective that from the time they moved in last April until mid-November they turned on the gas- fired central heating only once – to check that it was working. Even the feature gas fire has to be turned off as the room gets “unbearably warm”, Cox says.

The heat recovery system functions “like a big lung that’s always breathing, sucking every last ounce of heat out of the air before sending it out, with eight complete air changes every 24 hours. There are two solar thermal panels and a water harvesting tank on the roof.

Radiators and underfloor heating were all removed from the plan. “The leap of faith is how can you live in an Irish house without all those radiators. But they took us to see passive houses in Rosslare and Wicklow, and that reassured us that what it said on the tin was true.”

Cox became “increasingly fascinated” by the science that lay behind it and the proficiency of its construction. Once this was under way, there was a site meeting every two weeks that usually took two hours and visits to the factory where the timber frame was made.

The disaggregated frame arrived on site in October 2013 and needed a 60-tonne crane to lift the various pieces into position. “It was essentially in place after just three days,” he recalls. Neighbours were all notified in advance and some praised the efficiency of the build.

Then the builders started to “dress it with something like a Gore-Tex raincoat”, using fire-resistant insulation made from recycled newspapers and skimming the exterior with plaster. They also sealed everything on each floor to ensure the house would be airtight.

With oak doors and floor, the house has a book-lined study off the stone-flagged hall with guest bathroom opposite. The glass-sided staircase is lit by a tall lancet window while daylight is brought into the deep-plan livingroom by a chimney-style cut-out in the ceiling.

“What amazed me was the level of scientific intensity that Teresa Slattery [of MosArt Architecture] went through in doing the original design,” Cox says. “The research even includes producing meteorological data for the place where your house is to be built, individualised to your site.”

As for the “multilayered pancake” Bennett Construction laid as foundations, he says it “made me think that every house we’d lived in before was primitive by comparison” – which makes him wonder why NZEB houses do not automatically comply with the building regulations

As McCormack notes, “the rigour inherent in reaching passive house standard is way beyond everything in Ireland”. Cox goes even further, saying the Department of the Environment must embrace NZEB – based on its superior performance – “because the future demands it”.

The former MEP, who is now a consultant on the planned trans-European motorway from the Baltic to the Black Sea (among other projects), also foresees a significant opportunity for Irish SMEs to get involved in this sector – currently dominated by German companies.

Though many people might view Cox as a conventional politician, he has certainly seen the light in terms of conserving energy – and invested heavily in his convictions; unlikely as it may seem, Cox has now become a high-profile advocate for the passive house movement.

There’s an upside, of course: The gas bill for his own house averages €53 for two months, with electricity running at €130. “The life-cycle cost for the owner means that you’re a double winner,” he says – referring not only to the comfort level, but also the low cost of maintaining it.