Yeats family sell up in Dalkey after 56 years 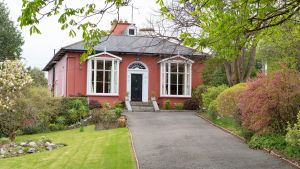 “I loved the house from the time we moved in. We couldn’t believe our luck,” says Caitríona Yeats of Cliff House, the home she grew up in. Caitríona, daughter of Michael and Gráinne Yeats, and granddaughter of WB Yeats, was 10 years old when the family moved into their new home in Dalkey, Co Dublin, in 1961.

She remembers a happy childhood playing in the house and large garden near the top of Coliemore Road. Her father Michael, a Fianna Fáil senator, one-time Cathaoirleach of the Seanad, MEP and first Irish vice-president of the European Parliament, died in 2007 and mother Gráinne, a harpist, in 2013.

All their surviving children live abroad and now Cliff House, a Regency house built in 1825, is for sale by private treaty through Sherry FitzGerald for €2.5 million. Its name comes from the granite rock on which the house is built.

The distinctive deep pink house will be familiar to anyone who has walked from Dalkey down Coliemore Road: it’s just outside the village on the corner of Rockfort Avenue, with a long, carefully-tended lawn sloping up to the front door.

The house, a protected structure, has many of its original features – large marble fireplaces in the two reception rooms on either side of the front hall, original tall square bay windows in both rooms, a centre rose and deep coving in the high-ceilinged music room in the back of the house.

But new owners will want to completely revamp and modernise the house which was divided years ago to create separate living quarters for Yeats’s late sister Síle, a journalist and radio producer who died in 2007 just months after her father.

The 345sq m (3,714sq ft) detached house stands on more than a quarter of an acre of lovely gardens, has a small annex, an internal courtyard and excellent views over the sea from two upstairs rooms. Currently, the entrance is off Rockfort Avenue, where electronic gates open into a good-sized driveway. Outside, a plaque in the wall reads “Teach na Háille – Yeats - Cliff House”.

Accommodation in the front of the house consists of the two reception rooms, a bathroom and a kitchen. At the back of Cliff House is a three-storey return with a family room, kitchen/breakfastroom, diningroom/music room, shower and a conservatory.

Upstairs are two double bedrooms and a large single: two of these have excellent views to the sea and Howth head. “I would make this a livingroom,” says Caitríona, standing in the main bedroom, looking out at the sea view. It’s a pretty room painted eggshell blue, with three tall windows and a vaulted ceiling.

Next door is her own bedroom, a large single/small double, which like the main bedroom, looks over the grounds of Loreto secondary school across the sea to Howth. A door in the corner leads up a short stairs to a quite large attic. Caitríona, a harpist, now retired, has lived for many years in Denmark but spends a lot of time in Ireland and looks after the Yeats archives.

At garden level downstairs there’s a bathroom and a large laundry room which links to a small annex that has a separate entrance: Michael Yeats had his study here.

A WB Yeats Rose created for the 150th anniversary of the poet’s birth in 2015 sits in the corner of a good-sized conservatory at the side of the house. This opens on to the tiered back garden, filled  with trees and colourful shrubs, from which there are good sea views.

John Wilson: Four cracking Christmas wines from Dunnes, each for €14 or less
7