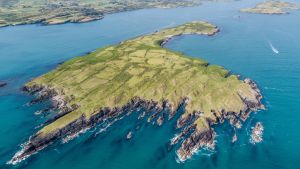 Could Castle Island in west Cork’s timing be any better? In the very week that its neighbour, Horse Island, sells to a wealthy European buyer for more than its asking price of €5.5 million, Castle Island on 123 acres comes to market seeking offers over €1 million. The uninhabited island in Roaringwater Bay stands east of the entrance to Schull Harbour and is clearly hoping to capitalise on a burgeoning post-coronavirus market for exclusive boltholes for the super rich. The unnamed high net worth buyer of nearby Horse Island embarked on an island hunt from December last and the deal was concluded during lockdown over WhatsApp.

Though both are readily accessible from Schull Harbour Castle Island doesn’t offer quite the same “walk-in ready” package as Horse Island which has its own helipad, electricity and water systems. Not to mention a main six bed property, five guest cottages, tennis courts, gym and saunas. Castle Island, for sale jointly through Dominic Daly and Knight Frank, is a more pared-back offering with only a pier and some castle ruins to its name. The powerful O’Mahony family situated defensive castles on these harbour islands to protect the bay from attack. The last inhabitants left around 1870 and since then it has been used mainly for its agricultural land.

Whoever buys it will have a blank canvas for sure, and if the sale of Horse Island is anything to go by, it’s unlikely to find a buyer overnight. It was placed on the market in 2018 with a price tag of €6.75 million before this was dropped to €5.5 million. In its reporting of the sale this week The Examiner said there had been two bidders competing for the 157-acre isle. Who knows the disappointed underbidder might yet step in and swoop up Castle Island as a fixer upper project.