Number 1, with views to Lambay Island, was once the captain’s house, and was acquired and refurbished nine years ago by its current owners

A Coastguard Station dating from 1912 and designed by John Howard Pentland who was responsible for the enlargement and remodelling of the GPO is on the market at €850k. Video: Lisney 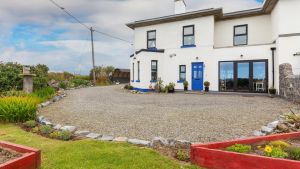 An old photograph on dúuchas.ie, the website of Ireland’s heritage service, shows a hand-drawn map of three smugglers’ caves in Portrane. In the golden age of smuggling, Portrane and nearby Rush were rife with bootleggers, so much so that the coastguard, besides aiding ships in distress, were tasked with clamping down on the illegal trade.

The caves lie beside the Coastguard Station in Portrane, and it is said that the smugglers used to follow local seals to discover deep caverns where they could store their loot. These waters have the largest colony of seals on the east coast of Ireland, based on Lambay Island which sit directly opposite the station.

The station, dating from 1912 replaced an earlier building, and was designed by John Howard Pentland, who also designed the Royal Fusiliers Arch at St Stephen’s Green, but became possibly more famous for his enlargement and remodelling of the GPO, which he completed two weeks prior to its destruction during the Easter Rising of 1916.

Number 1, which was the captain’s house at the turn of the last century, was acquired nine years ago by nutritionist Antoinette Witter who, together with husband Eamonn, restored the property with the help of architect Roger Bell.

“It was a nightmare as it took four years to get planning – it’s in a high amenity area – but it was worth it, as we get to fall asleep and also wake to the sounds of the sea,” says Antoinette.

Around the gardens, where she grows edible delights, are flotsam treasures collected by the couple from their morning walks along a 2 kilometre cliff walk to Donabate beach from their doorstep. Old lobster pots and an array of buoys lie about the place; “but we have become very choosy on what we keep. After a storm we discovered a signal buoy which had broken free from Malahide, it measured eight foot by five foot and looked more like a Nasa satellite. [It has since been reinstated.] On another occasion we rescued a baby seal which had drifted away from its colony around the peninsula head.”

On the stairwell in the house hangs a picture of The Tayleur, the 230ft sailing boat who, on her maiden voyage from Liverpool to Perth in 1854, met her fate off the rocks at Lambay Island directly opposite the property. With 650 aboard hoping to emigrate to Australia, only 280 survived, and in that number just three were women – their skirts too large and awkward to manoeuvre to safety. Many of the orphaned children were adopted by locals and a memorial now lies in the village to commemorate the disaster.

The property is one of four of a terrace in the station, and sits adjacent to the Martello Tower owned by public relations guru Terry Prone. Numbers 3 and 4, now derelict, have just been listed as sale agreed. Only a car park lies beyond – with its not inconsiderable claim to fame as the location for the first episode of classic comedy series, Father Ted. Because the area is designated high amenity, nothing further can be built out here.

Inside the 140sq m (1,509sq ft) property, old features such as original hearths and exposed brick walls have been retained, and now sit alongside an eclectic array of furnishings the couple have acquired over the years.

The watch room – where the captain would have surveyed the seas a century ago – is now Witter’s office where she operates her Happy Gut Clinic.

The property has three bedrooms and the view from the kitchen table is of Lambay Island, and the fishing trawlers navigating the surrounding waters.

Lambay Island was the first point where the Vikings invaded Ireland, and Witter can trace her family ancestry back to the Scandinavians who landed there in the eighth century, which also explains the rather madcap Viking-themed electric gates at the entrance to the house.

The Witters are headed for sunnier climes, and have placed their unique home, perched on the edge of a secluded cove, on the market through Lisney with an asking price of €850,000.