More than €400,000 has been spent refurbishing this home to suit a modern taste 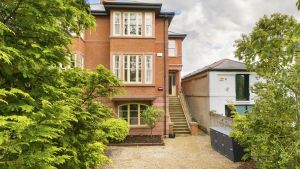 When a young couple who bought a three-storey red-brick in Sandymount moved in three years ago they hadn’t planned to leave after just a few years. They paid €1.925 million for the house, then spent more than €400,000 refurbishing it to suit their taste for a very modern home.

But the two – with three young children – are originally from Castleknock and Lucan and subsequently spent three years of weekends on the M50, visiting family. Then came Covid lockdown, which “brought home how important it was to be closer to family and friends” and it triggered the decision to sell.

Clydare is a 315sq m (3,390sq ft) three-storey five-bed semi and it’s now for sale for €2.25million through Sherry FitzGerald. It is one of a pair of houses built near the Strand Road end of Sydney Parade in 2002, designed then with features similar to those of Victorian houses, including decorative cornicing.

The garden-level’s flagstone floor was removed and replaced with pale oak. Architects Bright Design extended the house slightly at the rear, turning it into a dazzling white open-plan space with a sleek modern kitchen/family /breakfast room. Stairs with strip lighting at the side (replacing a spiral staircase) lead to a glass-balconied mezzanine overlooking the family room area. Floor-to-ceiling windows and doors open out to the patio at the rear, while angled ceiling windows make the entire space very bright.

A large Silestone-topped island unit, with seating and lots of storage space, is the main feature of the neat Porter & Jones kitchen, where work spaces and most appliances are concealed. The handsome grey marble splashback behind the induction hob is from Miller Brothers in Wicklow.

There’s a separate walk-in pantry next to the kitchen, a good-sized utility room and a toilet, both floored with grey ceramic tiles, a storage room and at the front of the house, a large home office/gym – “post-Covid, by far the most valuable room in the house” say the owners. The family room has an electric timber-effect sealed fireplace in a raised hearth with a built-in TV above it.

The owners usually enter the house via a door at garden level from the side passage. The front door, up steep steps from the gravelled front garden, opens into the first floor hall off which are the oak-floored living and dining rooms. Connected by double doors, and both with grey marble mantelpieces, they open straight into the mezzanine.

The owners have turned the mezzanine/dining room into a games room, with Fuzbol and a pool table. New owners might use it as a dining room with a bar – in the corner there’s an enclosed sink with space underneath for a small fridge.

There’s one small double bedroom with an en suite at this level and on the top floor there are four more en suite bedrooms, two of them small doubles, one a single. The main bedroom has a smart, mostly-tiled, en suite installed six months ago with a large shower. All the bedrooms have built-in wardrobes.

The back garden, bordered by high walls, plants and shrubs, has a generous granite patio and an astro-turf lawn, perfect for their children, say the owners. There’s room to park a few cars to the front, behind electric gates.