No 26 is a semi-detached four-bed on 0.2 acres with a very large side garden 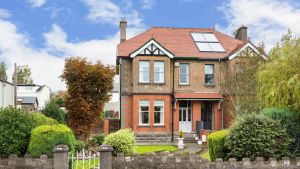 This Edwardian was built in 1911 by the vendor’s great grandfather, Dún Laoghaire builder Louis Monks, and has been owned and retained in the family for 109 years. It’s in good condition, but it’s the property’s potential that is likely to hold most attraction for buyers, says Sherry FitzGerald agent Rosie Mulvany.

Number 26 is a semi-detached four-bed on 0.2 acres with a very large side garden. It’s large enough, Mulvany believes, for someone to perhaps build a second house in the garden, or more likely the new owners could extend the house at the side as their semi-d neighbour has done.

Number 26 has valuable off-street parking at the rear of the house, accessed via a lane off Albert Road that leads to a small business park behind. The 155sq m (1,668sq ft) house with box bay windows is for sale seeking €1.45 million.

The house has been well-maintained over the years by Monks’s descendants and is in good but slightly dated condition. It has period details like the marble fireplaces in reception rooms, very elaborate ceiling coving and cast-iron fireplaces in two bedrooms.

Accommodation includes a front hall with an archway beyond a front door with stained-glass panels, a drawing room with box bay window, dining room behind it and an old fashioned kitchen at the end of the hall.

Upstairs there are four bedrooms, two singles and two doubles, a bathroom and separate toilet. The box bay-windowed main bedroom looks across Albert Road to a terrace of four more Edwardian houses built by Monks.

The gardens at the front and side, bounded by a granite wall, have meticulously maintained lawns bordered by flower beds and shrubs.

There are a number of outbuildings – including a storage shed and a Barna shed – and room for three cars to park in the rear garden.