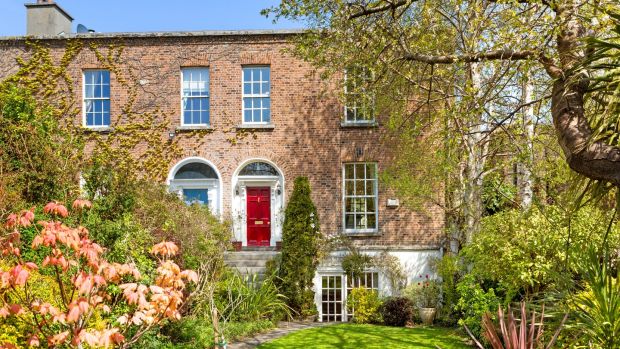 The owners of 6 Vergemount Hall point out that when they moved in to their period home in Clonskeagh 31 years ago they were the youngest couple on the terrace; now they say they’re the oldest.

They had been outbid on another house on the terrace when just a few weeks later number 6 came up for sale. It wasn’t the ideal time to buy a fixer-upper in several bedsits that needed considerable work as the couple were about to fly to Romania to adopt their first child.

They arrived back in Dublin to the chaos of the house and set up home in the garden level while they worked on the rest of the property room by room.

It quickly proved to be a lucky buy says the owner as a few weeks after they arrived back from Romania she discovered she was pregnant and so had two babies under the age of one while all around her the house was being renovated.

Three decades – and three now grown-up children – later they say it has been an ideal family home, plenty of space, within walking distance of good schools and every other amenity.

Even people who feel they know Dublin 6 well might wonder where Vergemount Hall is, as it is off Clonskeagh Road with its back gardens facing the road.

It is a very private location where as well as long back gardens, the houses have unusually-long front gardens – in number 6 the south-westerly front garden has a 30m-long lawn, as well as trees, hedging and shrubs and off-street parking for two cars.

The owners changed the original layout of the property, keeping the garden level as a separate one-bed unit when the renovation was complete, while they moved upstairs where it is laid out as a four bedroom – two doubles, two singles – family home with the bathroom at the top in the return.

At hall level the 2,852sq ft (265sq m) end-of-terrace house has two fine interconnecting reception rooms with the expected period features and grand proportions. Further on is the kitchen, a guest WC and a striking-looking Hampton conservatory.

his time around buyers won’t have all the restoration work – how they decide to treat the garden level will largely dictate how much they want to take on.

Leave it as is and it is a good source of extra income or home for an au pair or relative – or this level could be incorporated back in to the main body of the house if buyers want a larger kitchen that opens directly on to the garden.

They might also seek to upgrade the energy efficiency; the Ber is E1. Unusually for a period property in the area, number 6 is not a protected structure. It is for sale through Sherry FitzGerald for €1.7 million.