Nine-bedroom Gothic Revival mansion by the Liffey for €3m 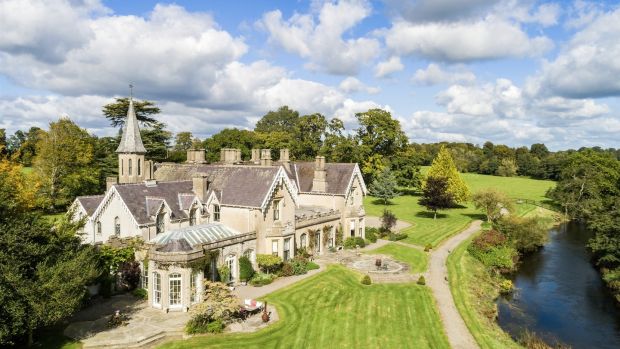 “It was the last of eight houses we’d seen that day,” says the owner of Barrettstown House, a sprawling fairytale of a place on the banks of the Liffey, upstream, where the river is still beautifully clean. It’s a day of cold sunshine, but the sheltered patios provide sun traps, and if it wasn’t for being so keen to explore inside, it would be hard to tear ourselves away from the river as it winds through lush paddocks, past the tennis court, and through stands of mature trees.

The owners had had a similar feeling. “We came down the avenue, through the trees, and suddenly had that oh, this could be ours… feeling. The tranquillity took our breath away.” The timeless sense of peace may well have won them over, but the house itself needed a lot of work.

The nine-bedroom Gothic revival house was originally built about 1820 – it was the O’Kelly family seat from then until 1970, and once upon a time the house would have owned all the land you could see from its elegant windows. The Land Commission changed that, so now the house comes with a very comfortable 25 acres, including a 15-acre paddock and a private stretch of riverfront.

An antidote to all that Georgian neo-classical regularity and symmetry we’re so familiar with in Ireland, Gothic revival architecture is great fun. Think romantic soaring delicacy, towers and crenellations, filigrees of woodwork and more than a smattering of gargoyles carved into your stonework. Barrettstown House has all these and more, and it has been lovingly restored and cared for by the owners, who bought it in 1992 and, as they say, “took it back to the brick”.

Returning from a stint in Hong Kong, they had been looking for an Irish base for themselves and their two children. Now, almost 30 years later, the children live abroad, and so they are faced with the difficult task of finding somewhere as wonderful to live – just on a smaller scale. Barrettstown House with 982sq m (10,570 sq ft) is guiding €3 million, with Jordan Estate Agents.

The refurbishments included rewiring, replumbing, new central heating, a new kitchen and bathrooms, and the addition of a very beautiful orangery – “the best thing we ever did”, says the owner, of the light-filled space with its comfortable chairs, dining nook and views of the river. They also added an enormous garage where an old stable block had once stood – although if you had horses in mind for that lush paddock, you could easily find space for stables here. And the gate lodge on the way in? It has two double bedrooms, and is included in the sale.

Despite the depth of the renovations, Barrettstown was blessed with an almost overwhelming abundance of original features. From the decorative tiling in the beautiful entrance hall to the ceiling plasterwork, the elaborately carved staircase to the hand-painted ceiling glass above the gallery, there’s something to take the eye everywhere you look.

The owners find it hard to pick out their favourite spots. The kitchen with its original servants’ bells and large Aga is much beloved and, sure, the orangery is delicious in the summer. But then there’s a rare and rarely beautiful barrel-ceilinged drawing room just waiting for someone fabulous to gallop up outside, fling themselves off a horse and stride through the French windows and propose at any moment.

In just such an event, you could celebrate in the bar – a cosy and fun room – that leads on to the study. It is clear that good times have been had in the former, though the evidence of the original rent window (a panel hinges down so that cash could be handed through) in the latter is a reminder of harder times for at least some of the parties involved.

The owners worked with the late Peter Johnson on the interiors. “He was absolutely marvellous,” they say. “We liked him instantly. He asked us to choose the fabrics first – he said you could tell what people were like from their selections – and build up from that.”

Alongside their sensitive restorations and preservations, the owners also made some clever changes. An original entrance in the older Georgian part of the house is now a wine room, and a smaller second kitchen is a gym and sauna. Upstairs, the nine bedrooms all have their own charms, although it’s hard to imagine guests ever tearing themselves away from their front suite. Opposite this, the master has an en suite in what was once the family chapel. Sacreligious? Maybe, but you could achieve a great deal of happy ablutions in the marvellous bath.

On the subject of bathrooms, there’s a brilliant double shower-in-the-tower, to be enjoyed by those sleeping to the rear of the house. “It’s a great arrangement,” says the owner. “When the kids were teenagers, they could just hang out back here.” In fact, the whole place feels like one big great arrangement: less than an hour from Dublin, and a stone’s throw from Newbridge and Naas, it feels like another world.

“It’s definitely a feel-good house,” the owner says. “It exudes its own pleasure if you like, you catch it.”