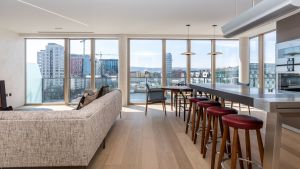 In 2018 when a Dublin docklands penthouse came on the market the selling agent was taking no chances when an overseas buyer made a serious offer. He asked when they might like to view the premium duplex before making their final decision, but the New Zealand-based buyer wasn’t booking any flights. Did the online virtual reality tour not reflect what the place looked like, she asked. It’s exactly how it looks, the agent conceded. And the €1.5 million deal was done.

The buyer turned out to be Maryanne Owens, a New Zealand businesswoman and daughter of Hugh Green, an Irishman from Letterkenny, and one of New Zealand’s richest men when he died, in 2012, leaving a €300 million fortune. Having worked in the family farming, infrastructure and construction business for years, the Dublin deal clearly wasn’t Owens’s first real-estate foray. She and husband Mark were looking for an Irish base that was also within easy reach of the rest of Europe.

The allure of Hanover Dock was obvious – even from the other side of the globe. When these apartments were launched in 2005 the scheme laid claim to the best Liffey and Grand Canal Dock views. It also sat alongside Dublin’s newest and most exciting building, Daniel Libeskind’s Bord Gáis Energy Theatre, and the striking Marker Hotel completed by Manuel Aires Mateus. U2 guitarist the Edge bought the best appointed penthouse – though it clearly hasn’t been lived in for some time – and this one, also south-facing, is located next door.

Soon after buying Owens did make the journey to Dublin and took a 15-minute tour of her new property en route between Dublin Airport and the west. Immediately afterwards work began to entirely reconfigure and refit the duplex in a process that took almost a year and an estimated €500,000 to complete. Having never spent a night in the property the Owens have now decided they are not likely to get the use they had hoped from the apartment and are selling it through the same agent they bought from, Owen Reilly, seeking €1.7 million.

The upgrade works were carried out to Maryanne Owens’s instructions from New Zealand, with the project managed locally by architect Albert Noonan and Realm Concepts. The brief was to turn the existing layout on its head and maximise every inch of space. The entire interior was stripped back to its shell and rebuilt to a new configuration, replacing all doors and windows and installing skylights to flood light through the stairway and bathrooms.

Architect Albert Noonan says the project was a rare joy where the client wanted something unique but knew exactly what was required, and the contractor, Brendan Monaghan, apart from rebuilding, rewiring and replumbing the entire apartment pulled off some unforgiving challenges, including plastered in-frame doors (no architraves) and precision junctions between the walls and floors (no skirting boards).

“This was a penthouse in its position, but not in structure; the interiors were disappointing. The client had a very clear minimalist vision to strip it back completely and make it all about the natural textures. When clients have such high expectations you often find everyone on the project rises to the occasion.”

Belfast-based stuccodore Paul Marlow, who has worked on some of the world’s most exceptional homes, spent six weeks applying a polished Marmorino finish to the interior walls. The smart Lumen lighting system was configured entirely to showcase the walls to best effect under different light settings. Everything about this property is smart – the blinds, heating, lighting and security are all automated and can be controlled remotely.

Originally the lower floor was occupied by the main bedroom suite and a long narrow kitchen/dining/living area, with a more formal living room located above on the first floor. The lower floor has now been broken through to create one large kitchen/living space with corner views over the Canal Basin, and Aviva Stadium and Dublin mountains in the distance.

The main bedroom has been relocated upstairs to create a lovely bright bedroom, dressing area and bathroom suite with panoramic views across the city. As with all good design an apparently simple change has made all the difference. Sliding Selo doors can be closed off for privacy while a wraparound balcony on the top floor and a good sized balcony off the living area extend the available space.

Running to 132sq m/1420sq ft it’s not palatial, but every square inch has been used to good effect. The industrial stainless steel, melamine resin and polished granite Bulthaup kitchen is top of its already high-end range, while the Gaggenau appliances include a cooker hob not previously seen in Ireland.

The original stairs was replaced with a bespoke version by Kerry-based Signature Stairs and heavy Buster + Punch ironmongery was used for handles and sockets.

Aside from the main bedroom suite to the rear there’s a further double bedroom with en suite, and a smaller room configured as a study with built-in double desk space could work as a third bedroom. The bathrooms and en suites are fitted with Italian terrazzo stone and handcrafted basins designed by Angelo Mangiarotti.

Irish family stuck in Cyprus: ‘We hope our flights home are cancelled’
3