Homes have separate sitting room, guest toilet and kitchen-dining room to the rear 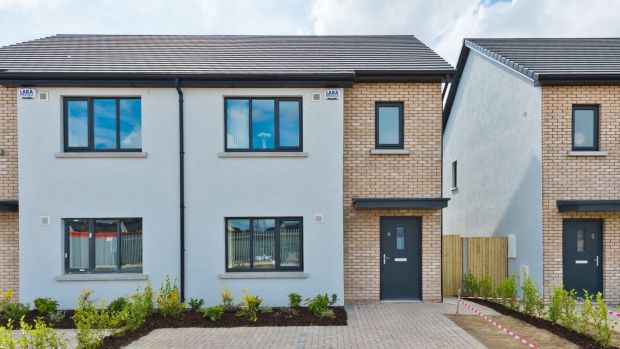 On a site that extends to 20 acres (8.09 hectare) in Hollystown, between The Ward and Mulhuddart and beyond the city limits of the M50, Bay Meadows is a development by Archtree Developments that when complete will comprise 183 homes.

Archtree bought the Hollywoodrath site from Marlet last year for over €15million (Marlet and its backers had paid €3.275m for the site at the bottom of the market). It came with planning permission for 31 two-bed houses of 89sq m/958sq ft; 125 three beds of between 111sq m and 114sq m; and 27 four beds sized between 151sq m and 153sq m. Bay Meadows is now up and running.

Last July selling agent Kelly Walsh sold 12 two- and three-bed yellow brick units off plans at the Dublin 15 site with prices from €289,500 for the two beds and from €330,000 for the three beds. It is now bringing the first 22 units – two- and three-bed terraced homes and four-bed semis – to the market.

All have shaker-style kitchens by Keane, gas-fired central heating and sizeable gardens. Appliances are not included in the package.

The two beds are impressive. There are four in this launch with prices starting from €305,000, an increase of almost 5 per cent on pre-launch. They come with a separate sitting room to the front, a central staircase and guest toilet and the kitchen-dining room to the rear.

These units have gardens that are about 30ft long by 17ft wide.

Upstairs each of the bedrooms has built-in wardrobes and an en suite shower room which means two friends could potentially buy together without one having to compromise, or a rent-a-room option could be factored into mortgage repayments. Additionally, there is a press on the landing that offers about five cubic metres of storage. While the attic isn’t readily convertible it does have ladder access.

The three-bed units are on wider plots and come with a separate, good sized utility room, big enough to accommodate a family-sized clothes horse with ventilation and a radiator. Prices for these, of which there are 16 in this first launch, start from €340,000.

There are four four-bedroom semis also coming to market. These are asking from €399,500

The development is on the flight path in and out of Dublin airport, which is only about a 15-minute drive away. Each unit has parking for up to two cars.

The show homes have been designed by Angelina Ball, of Avenue One Interiors, formerly of Phoenix Interiors.

Archtree, headed by Shane Barrett, Paul Whitaker and Tom Gilligan, made its first acquisition in 2017 when it purchased the Saint Pancras site in Terenure, Dublin 6W.

Hollywoodrath, Regency Homes’ first scheme as developers, is situated just up the road. Regency paid in the region of €13.5million for the 67-acre site in 2014 and is building 450 homes on the lands. It launched in 2017 and has sold 205 units.