The restoration plan is good to go. A roof and very deep pockets are all that is needed now 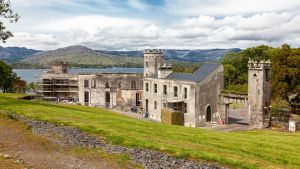 For many people worldwide, the current Covid-19 crisis is causing a reassessment of how we live, in terms of our health, clean air and the breathability of our homes. Are A-rated homes – essentially airtight boxes – really the future?

While they may provide high energy performance and low running costs, is this notion of recycled air necessarily good for our respiratory systems? In the US and Australia, the concept of wellness in terms of buildings is not a new one, and it seems to be gaining traction.

In Ireland, conservation engineer Chris Southgate is promoting a Building Health Rating “in which we do not just assess the energy use but also the health impact of buildings”.

While in lockdown, Southgate has written a paper: Lock down – Open Up: A mindful approach to the Coronavirus (Covid-19) pandemic: “If we live in an unhealthy environment, it stresses our immune system and this, in turn, presents a potentially fatal risk. The subtle effects of toxins in the environment and pollution affect not only our susceptibility to coronavirus, but also any other viral diseases that we may face in the future.”

Southgate, who specialises in historic conservation, was engaged by the owner of Glengarriff Castle –who has since died – to turn the shell of the castle into his dream home. The UK-based family now have no desire to finish the works – all of which are planned and ready to go by Southgate – and have placed the unique waterside property on the market.

“It will, when finished, have a great flow of natural air through the building,” says Southgate, in reference to its future breathability and health rating.

The 1,147sq m (12,342sq ft) Gothic property dates back to 1790, when it was constructed for Colonel Simon White, brother of the first Earl of Bantry – whose family reside in nearby Bantry House. It has an illustrious history when it comes to literary guests who have visited over the years, including John Millington Synge and William Butler Yeats who stayed at the castle, and George Bernard Shaw, who it is said penned his play St Joan there.

It operated as an exclusive hotel popular with Northern Irish and English guests, until 1975 when it closed, and was later purchased by a German, who lived in one of two associated buildings – former staff quarters – and intended to transform the castle into his dream home.

Taxation at the time for larger buildings was high, and by way of retaliation he quite shamefully removed the roof to avoid paying the property tax.

It was subsequently purchased by a Cork consortium in 2003 who secured planning permission to restore the property to a luxury hotel with apartments.

They then placed the castle on the market with a €20 million price tag. Having refused a €15 million offer for the estate, it eventually sold for €1.6 million six years ago.

One block of the castle measuring 186sq m (2,000sq ft) has been partially restored – with new windows and a roof. It will need further investment for this part to become habitable, while the remainder of the property will require even deeper pockets to finish.

The grounds though, overlooking Glengarriff Bay, will be a big part of the attraction. The broadleaf woodlands – that occupy 87 acres – comprise oak, beech, Japanese red cedar, and a great variety of shrubs and flora. Wildlife include red squirrel, pine marten and sika deer, and that is before you factor in the multitude of marine wildlife which the waterside location offers.

This stretch of the west Cork coastline also enjoys its own microclimate, thanks to the warmer currents of the Gulf Stream that create something of a tropical paradise, opening up huge possibilities in terms of what could be grown here.

The appeal of the castle, despite the considerable investment which will be required to complete it, is the fresh air – filtered by the natural lungs of the woodland – and its majestic waterside setting, which also comes with an old pier.

Novelist William Makepeace Thackeray, almost two centuries ago, summed up the location as follows: “What sends picturesque tourists to the Rhine and Saxon Switzerland? Within five miles around Glengarriff, there is a country, the magnificence of which no pen can give an idea.”

First Look: Dig In, the Maser-curated ‘art diner’ that’s about to open in Dublin
9