This converted coachhouse has planning permission for another two-storey, four-bedroom house on its grounds, but that would mean losing the swimming pool 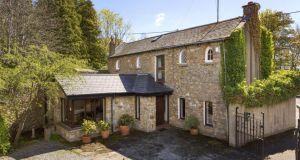 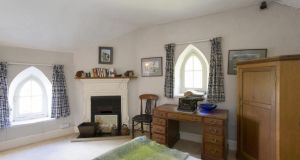 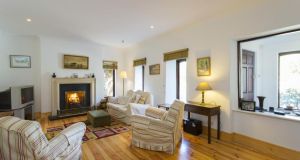 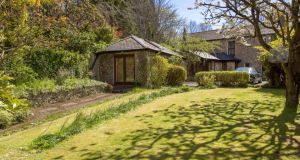 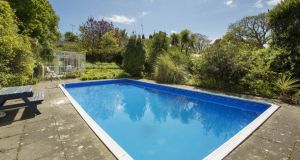 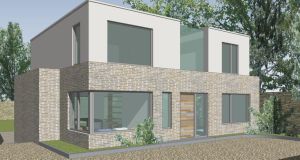 The site has permission, granted this year, for a 202sq m two-storey four-bedroom house to be built where the swimming pool is currently located

The return of cranes along the city skyline is a clear indication that construction in Dublin is underway again.

New owners of Mount Anville Lodge will have a few options – depending on how they perceive the potential of the site.

On one hand they have the choice of renovating the cut-stone lodge, retaining the full rambling gardens and swimming pool.

The lodge itself is a charming property and though in good condition, new owners may want to update the kitchen. It was, in its former life, the coach house of the period house next door – which explains the mature gardens and pool. The property also takes its name from the house next door, which was the original Mount Anville Lodge.

On the ground floor are a dining room, elegant living room and small kitchen, all of which have wooden flooring and wonderful views of the garden.

The property has just two bedrooms, both of which feature gothic shaped windows, and the smaller room has an en suite and fireplace.

Standing at 103sq m, it is not spacious, but merging with the adjacent cut-stone studio would dramatically increase the floor space and result in a fine sized family home with a generous garden.

Secondly, as the site has permission, granted this year, for a 202sq m two-storey four-bedroom house, designed by architect Kim Dreyer – they can erect a modern dwelling and have two houses – albeit with much smaller gardens.

This build would result in the loss of the swimming pool, which may not be such a forfeit considering the Irish weather. Also to go would be the crumbling glasshouses, which are home to triffid like geraniums, Passiflora, and the ancient vines which weave along the ceiling.

The mature gardens, which would benefit from some serious weeding to restore their former splendour, have a magical setting with an abundance of character including a Victorian garden with box hedging and lavender. Currently bluebells and wild garlic form a carpet under an Acer Palmatum beside a raised pond.

At the end of the garden, dappled light shines through the towering trees surrounding the completely private swimming pool.

The future of Mount Anville Lodge really depends on the eye of the buyer – whether it is the aesthetic choice to retain the full gardens, or see the development potential and erect a further property, splitting the 0.28 acre site into two.