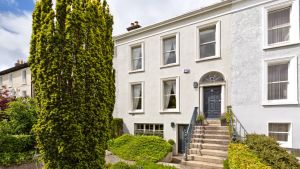 Interior designer Jane Duffy-Lynch likes a project. She and her husband Simon had finished renovating their house in Portobello when they sold and moved 11 years ago into a listed early-Victorian house in Blackrock, Co Dublin, which needed serious work.

It was structurally pretty good, she says, but had flowery wallpaper everywhere, fireplaces that needed to be opened up and walls that needed replastering. The couple stripped the wallpaper and the floorboards, painting floors and most of the walls white, opened up the fireplaces, installed a new kitchen and new bathrooms and a combi boiler for gas-fired central heating.

It has original period details, such as the simple coving of early Victorian houses and sash windows with shutters but a definite Scandi aesthetic: much of the house is furnished with modern and vintage pieces from a homewares shop that she and her sister owned in London before closing it in 2017.

Now 29 Mount Merrion Avenue, a 218sq m (2,364sq ft) mid-terrace two-storey over garden five-bed built around the 1830s, is for sale through Knight Frank for €1.395 million. It comes with planning permission acquired in January this year for a two-storey rear extension designed by Dermot Boyd of architects Boyd Cody.

An interesting quirk is that two of the five bedrooms are on the first floor of the house next door: the couple have “flying freehold” of the rooms, a legal term that gives them full ownership, an arrangement dating back many years and is legally watertight, says Jane.

The house is set well back from busy Mount Merrion Avenue on a terrace close to the Blackrock end of the road, with a prettily landscaped front garden. The front hall is painted a dark Stiffkey Blue by Farrow & Ball. The interconnecting reception rooms on the left, linked through a wide arch, both have two tall sash windows and open fireplaces: these don’t have the handsome mantelpieces typical of the period, but these could be installed. The fireplaces had been blocked up but were opened and the chimneys fully lined – the cost of doing that absorbed the cost of replacing mantelpieces, says Jane.

A few steps at the end of the front hall lead to a space housing utilities and a toilet. Further down, at garden level, the pretty country kitchen and breakfastroom in the basement and a large playroom/family room have quarry tiled floors.

The wall behind the kitchen table is tiled with white subway tiles – easily cleaned, says Jane, who has three young sons. The chimneybreast in the playroom is also lined with white tiles: a bright red cupboard sits in it now, but new owners could install a stove, says Jane. Doors from here open into the back garden.

Upstairs, the main bedroom looks over the front of the house through two tall sash windows: it has a white fireplace and an en suite bathroom part-tiled with pretty pale green subway tiles. There’s also a family shower room at this level as well as a small tiled bathroom up a short flight of stairs.

There are three more double bedrooms and a single: one is currently “a Lego room”, another Jane’s study, from where she runs her business. The couple put soundproofing under carpet in the two rooms on the top floor of the neighbouring house.

Outside, a golden elm and strawberry tree are among the trees and flowers in the back garden designed by Verney Naylor in the 1980s – Jane has a chart with details of the original planting.

The lawn in the centre is being reseeded – it became a bit of a football pitch for the couple’s sons during lockdown.

At the end of the garden is a double garage, accessed via a rear lane from Mount Merrion; the couple use the garage but there’s usually space to park on the road at the front of the house, says Jane. The back lane, lined by trees, has electronic gates, which makes it a safe place for children living along the terrace to cycle and play.

Brianna Parkins: My other half is trying to get me excited about spending a summer in Ireland
3

We emotionally reticent Irishmen would be even worse without sport
9

Senator Lynn Ruane: I had a few wild years. Pregnancy calmed me down
Real news has value SUBSCRIBE