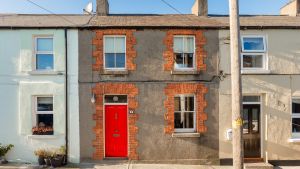 Annaville Avenue in Blackrock is a small cul-de-sac off Newtown Park with pedestrian access on to Fleurville. Its mixed housing stock includes artisan cottages and period terraced properties. Number 3 Redbrick Terrace is one of the latter.

The front room has a curious plaster ceiling, set out in spokes from the centre of the room. The Newtown Park Fife and Drum Band, according to a neighbour, used the space to practise in the early-20th century, and during rehearsals would suspend the large base drum from the centre point in the plasterwork.

These days the street is serenely quiet so it’s hard to imagine such a cacophony ever taking place here. The lovely square room has a wood-burning stove and a cottage-style sash window that, like the others in the property, is single glazed. There is a decent eat-in kitchen to the rear where sliding doors open out to a west-facing yard.

Its granite boundary wall once formed part of the Plunkett estate but is now covered in clematis creeper and in the flowerbeds purple crocus peer skyward.

The stairs lead directly from the sitting room via a low bulkhead up to the property’s one bedroom, a lovely dual-aspect space with honey-coloured timber boards.

The house’s only bathroom is an internal room, lit by a skylight. The house which measures 60sq m/645sq ft and has an E2 Ber rating is seeking €395,000 through agent SherryFitzGerald.

The property had planning permission to extend out over the kitchen, to add a landing and second bedroom and move the water tank which is currently above the flat roof to the rear, inside. This has lapsed.

A single storey cottage on the other side of the street in need of complete modernisation came to market seeking €260,000 and has been recently sale agreed for more than that sum. Adjacent to it, planning was granted last December to Rockshore Investments for the construction of 68 build-to-let one- and two-bed apartments. This large site fronts on to Fleurville with a potential pedestrian and cycle entrance on Annaville Avenue.