This late-Georgian house on 50 acres captivated its Dutch owners, and comes with a fishing stretch along the river Slaney, noted for its weirs and pools for salmon and trout fishing 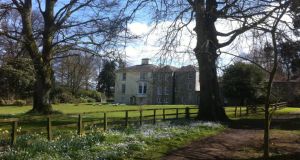 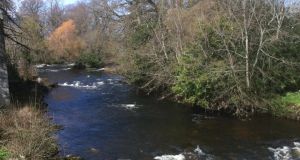 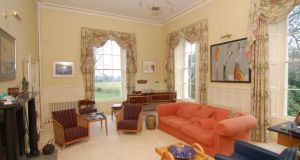 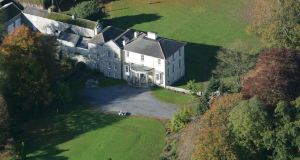 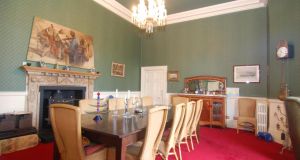 Five years ago, Ballynoe House on 50 acres at Ardattin, Co Carlow, was valued at €3.8 million. Today, the estate is for sale by private treaty from joint agents Sherry FitzGerald and Browne Corrigan, with an asking price of €1.25 million.

At this price, there appears to be value and it’s likely to attract savvy overseas interest.

The property, in lovely Slaney river valley countryside, is a short drive from junction five on the M9 (Dublin to Waterford) motorway – about an hour south of theRed Cow interchange and nine miles from Carlow town.

The owners – Willem and Anneke Savelkouls – fell in love with Ireland during a hunting holiday two decades ago and bought the estate in 1995. They first used it as a holiday home but eventually moved to Ireland to pursue country sports, breed horses and keep sheep.

Now they’re downsizing “with a lot of regrets” and returning to the Netherlands but will “miss the space, the way of life where everything goes so easy” – and even the Irish weather.

Ballynoe House was originally home to a Carlow “gentry” family followed by a succession of British army top brass. For a few years in the 1970s, it was owned and used as a weekend retreat by the late architect Sam Stephenson (best remembered for his controversial Central Bank in Dame Street and Dublin City Council offices at Wood Quay designs).

His primary legacy – one of the most unexpected and jaw-dropping features to be found in any Irish country house – is an outdoor swimming pool and modernist pavilion with sauna and changing rooms plonked into an early 19th-century walled-garden.

It’s as shocking and unexpected as any of his Dublin structures. Why did he bother when the property has access to natural swimming in the Slaney? This carbuncle could be easily removed. If not, the pool and pavilion will need some costly overhaul and maintenance.

There’s also an open-plan living room/kitchen and a very large study which once housed a private school.

The garden or basement level, which can be accessed from internal staircases or directly from outside, is pleasantly bright and includes a games room, an extra bedroom, a wine cellar, a drying room, office and a self-contained apartment (living room, bedroom, kitchen and bathroom) for a live-in caretaker or housekeeper.

The surrounding 50 acres are “richly fertile lands, which include good pasturage and woodland” with some very fine trees and what the agents accurately describe as “a fabulous stretch of the river Slaney” – 1.25 miles (2km) of private riverbank with some noted weirs and pools for private salmon and trout fishing.

Willem Savelkouls, incidentally, hasn’t adopted the Irish angler’s habit of whopping exaggeration and admits, with disarming honesty, to never having landed a salmon – despite frequent efforts – but, has, over the years, “caught lots of trout”.

Perched high above the riverbank is a little fisherman’s chalet with a log fire and picture window overlooking a mesmerising vista.

You could travel the length and breadth of rural France and not find a more idyllically Arcadian spot for a picnic, river bathing, angling or just plain idling. No wonder the Dutch found it “wonderful” and “unbelievable”.

Back to school: We went into a tailspin when our eldest had a temperature
2

The Covid-19 pandemic is changing the way we speak
9