A Phibsborough redbrick three-bed home with a large garage, perfect for an office space 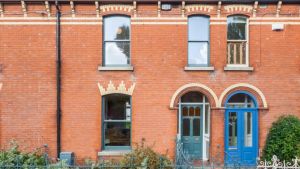 Norfolk Road is one of the leafy redbrick-lined roads off Phibsborough’s St Peter’s Road where a national school of the same name is located and close to a side entrance to Dalymount Park.

While the majority of the road comprises redbrick period properties, of which number 35 is one, there is a small enclave at the top of the street of 1930s-constructed homes set around a crescent.

Number 35, a mid-terrace three-bed, was purchased by the current owners three years ago for €385,000, according to the Property Price Register. It’s a street that has seen a lot of sales activity with 12 such redbricks sold in the last five years.

“Nothing had been done to it since the 1930s so it was untouched,” one of the owners says. “It was very beautiful but in very poor condition.” Its original features were intact though and these included timber floors – since insulated and gently waxed – architraving and picture rails.

The internal doors have been stripped of generations of paint to reveal their bare wood and the reception rooms opened up to flood both rooms in warm, southern light from the front.

The living room has a smart, stone fireplace into which a wood-burning stove has been set. It has a ceiling height of 2.9m. The kitchen, in the room to the rear, was originally accessed via the return so it is set down a level with a bull-nose, granite-edged step connecting the two. The ceiling reveals the floor joists above and the chimney breast brick is painted in a soft, chalk-finish paint with the range cooker set into the fireplace. The smart, oak cabinetry, that lines both walls, is by Charlie Crowley Kitchens in Stradbally, Co Waterford.

The window height to the rear has been dropped to better frame the north-facing garden, which is laid out in lawn with gravel paths.

Once a G-rated house the property now has a healthy C2 Ber rating, thanks, in part, to its new accoya timber sash windows by Mellots Joinery, plus floor and attic insulation.

There is a small utility room to the rear where the washer and dryer are located and the back door to the garden.

At the end of the garden is a sizeable garage, almost 23sq m in size, that could become a good home office. It has vehicular access onto Connaught Street.

The house measures 86sq m (925sq ft) but there is scope to extend out as many of the neighbours have already done.

There is a wet room on the return and three bedrooms on the first floor, two doubles and one single.