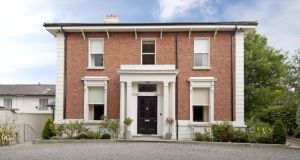 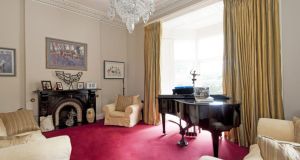 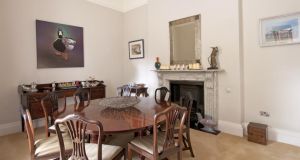 The elegant Wasdale House is a grande dame property that has been stripped of its gate lodge and grounds thanks to mid-century suburban sprawl. Situated down a small lane just off Rathfarnham Road it has been surrounded on all sides by housing, including an estate that bears its name and was built in the early 1950s.

The property itself is a bit of an enigma in that there is virtually no documention on it, save the fact that it was once inhabited by a William Vincent Esq, according to the 1865 edition of Thom’s Irish Almanac. But who was he? And how did he get to live in such a fine house?

What we do know is that it was built in 1859 by architect Edward P Gribbon, who also built the Presbyterian Church on Ormond Quay. According to the Dictionary of Irish Architects, 1720 to 1940, Gribbon was commissioned to design a “villa with gate lodge and terrace for W Vincent, ‘facing Sir Robert Shaw’s demesne’.” Shaw, a relative of writer G B Shaw, occupied Bushy Park House, now part of Our Lady’s School on the Templeogue Road.

Fast forward to the early noughties when Wasdale was sympathetically restored and became the corporate headquarters for medical manufacturing company Trulife Ltd who count breast forms and enhancers among the devices it manufactures. The chief executive liked the house so much that he transformed it back into a residential home, Lisney agent Ciaran Cassidy explains.

The John Daly-designed kitchen, at the end of an ornate ceilinged hall, is situated in a room that spans the original width of the property and was once the boardroom. Matching white marble fireplaces face symmetrical, east-facing bay windows, complete with shutters.


Stained-glass dome
The living room part of this sweeping space has two bay windows that cleverly conceal doors that open out to the garden. At some point a staircase was added, cutting through the space to create direct access downstairs to garden level.

The hall leads round to a bar area that looks uncannily like a formal reception desk. Off it is a glass doored utility room, access to the outside and steps down to a series of limestone-tiled rooms, all with small windows that jar with the 14ft grandeur of the ground floor rooms. The rooms are listed as a playroom, additional bedroom, a living room and a rather large entrance hall that could also be a kitchen as it has a separate entrance.

The sense of scale of the drawing room, carpeted in an old fashioned red, with its black marble fireplace, crescent tiled insert and bell pulls on either side of the mantle, is absent at garden level where there are few original features.

On the landing of the first floor there is a stained-glass centre dome that lets light pour in. Off it are four fine bedrooms, all with built-in wardrobes. The master has a large en suite with a wetroom shower. There is a small office with a cast-iron fireplace on the return.

The house, while sizeable, has very little by way of grounds save for a small south-facing terrace to the side.