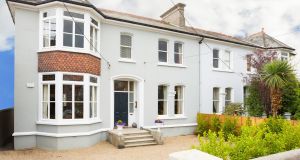 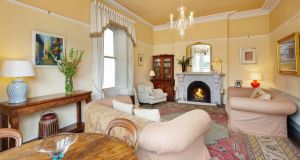 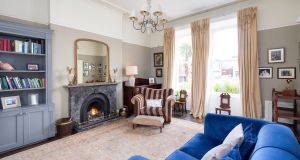 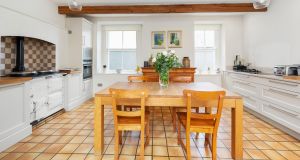 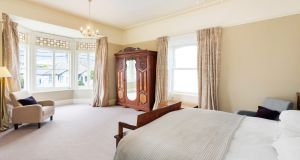 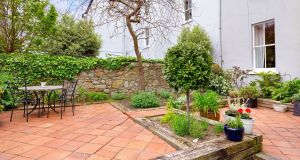 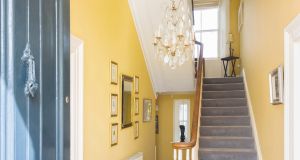 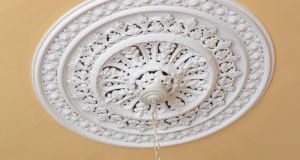 A large Victorian house in Glenageary, Co Dublin, was the final resting place of playwright JM Synge: his coffin was laid out on the table in the front room of Glendalough House before his funeral in 1909. Synge was 37 when he died in a nearby nursing home, but had lived with his mother in the Glenageary house she had rented for a few years before his death. According to Synge’s nephew and biographer, Edward Stephens, the playwright was visited in the house by actress Molly Allgood, with whom Synge had fallen in love in 1906.

The owners of Glendalough House, who are selling it after 34 years and are proud of the Synge connection, laugh when asked if they ever felt haunted by the playwright: “Never,” they say. “It’s been a very happy home.” Now their 231sq m (2,486sq ft) five-bed semi-detached home on Adelaide Road, Glenageary, Co Dublin, is for sale through Sherry FitzGerald for €1.2 million.

It’s a fine period house with many of its original period details intact. But its location – between Hudson Road and Spencer Villas on Adelaide Road, a short walk from Glasthule and the sea at Scotsman’s Bay – is one of its chief attractions. That’s why its owners will soon move into a house they have built immediately next door, on land that used to be Glendalough’s side garden, and the finishing touches are still being done to the new house as Glendalough goes on the market.

The double-fronted house has two main reception rooms on either side as you enter: the drawingroom on the left is a large room with a white marble fireplace opposite the tall bay window, which still has its original glass with coloured panes at the top. Other period details include high ceilings with a centre rose, deep coving and cornicing, and working shutters on a sash window at the side of the room. This looks onto a side passage and the exterior wall of the new house, which will be painted white to reflect light back into Glendalough.

The owners still call the reception room on the other side of the front hall “the playroom”: now their children are grown, it’s a comfortable sittingroom with two tall windows looking onto Adelaide Road and a grey marble fireplace.

The kitchen is a few steps down at the end of the front hall, which also has a centre rose and original floorboards. The owners refurbished the kitchen when they moved in and again four years ago. It has pale kitchen units, an Aga in a tiled chimneybreast, a beamed ceiling and two windows looking onto the side wall of the new house.

A door leads out into a sheltered courtyard garden with terracotta tiles, raised flowerbeds and a sunny seating area.

A door in the garden wall leads into the narrow side passage. There are several sheds outside, at the back of the kitchen: new owners might consider demolishing them to expand the kitchen out here, building a modern glazed extension.

Upstairs, the main bedroom on the first floor is a large room directly over the drawingroom below and has a matching original bay window at the front of the house. Another double bedroom on this floor is fitted out as a study – and the third is apparently the room where Synge did his writing looking up to Dalkey Hill.

Now the back of houses on Spencer Villas (built in 1919) obscure that view – but there’s a good view of the new park that Dún Laoghaire-Rathdown County Council is building on Hudson Road.

There are two more bedrooms, one on the first return, one on the second at the top of the house, both with small en suite shower rooms. The house is well supplied with bathrooms: there are three at different levels as well as the en suites.

There’s room to park three to four cars in the gravelled front garden.

Glendalough has had only two owners since it was built in 1889 by the Harte family: the Hartes rented it to Synge’s mother (who died six months before him in 1908) but it was still owned by the family when the present owners bought it in 1985.

Creches reopen: ‘It was fantastic to just stand and hear the 22 kids playing’
10

Fashion in the attic: Irish couturier’s D4 home is a cut above for €1.975m
Real news has value SUBSCRIBE