New Ballsbridge home being lined up for Israeli embassy 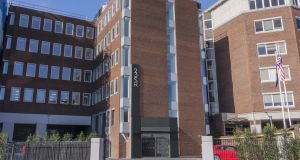 After serving as the home of the Israeli embassy in Ireland for over 23 years, Carrisbrook House in Ballsbridge could be on the verge of securing a new lease of life following a recent move by the Pembroke Road building’s owners, U+I and Colony Capital, to expand their Dublin 4 office portfolio.

While the British property group and its American joint venture partners only completed their €25 million acquisition of 23 Shelbourne Road from Friends First last week, an examination of the planning files at Dublin City Council shows they had already lodged an application on June 26th last through a newly-formed company called Spectre (Shelbourne) Ltd to convert its entire fifth floor for embassy use.

Both the nature of Spectre’s planning application and its timing have prompted speculation among Dublin office market specialists that the Israeli embassy could be preparing to relocate its operations from Pembroke Road to Shelbourne Road.

While spokespersons for both U+I and the Israeli embassy declined to comment on the matter, the move might serve to make life less complicated for both parties, at least when it comes to the thorny issue of Carrisbrook House’s redevelopment.

Only last year, U+I and Colony found their plans for the alteration and extension of the building become the subject of an appeal to An Bord Pleanála by the then Israeli ambassador, Ze’ev Boker.

As part of that appeal, planning consultants for Mr Boker argued that a change of use from embassy office to general use at the Ballsbridge property would represent a material change as an embassy had different privacy and security arrangements.

Concern was also expressed that the developer’s proposal for a rooftop terrace could present a “significant threat to the security and privacy of the user of the fifth floor.”

U+I and Colony argued successfully however that their proposal didn’t materially affect or change the situation in relation to the privacy and security of the embassy. They also said there was no reason to believe there would be an increased risk of unauthorised access following the proposed alterations to the building.

With its objection to the redevelopment of Carrisbrook House rejected by An Bord Pleanála, a source said an approval from Dublin City Council of Spectre’s application for embassy accommodation on the fifth floor of 23 Shelbourne Road could yet provide an acceptable solution to the concerns of the Israeli ambassador and his officials.

U+I and Colony acquired Carrisbrook House for €23.5 million in 2016. While the price represented a relative bargain compared to the €46 million developers Bernard McNamara, Jeremiah O’Reilly and the late David Courtney had previously paid to secure ownership of the property in 2007, the building has struggled to attract new occupiers since then. The Israeli embassy has been the sole tenant at the Ballsbridge property since AIB Fund Managers vacated their offices there in 2008.