Looking for the next property hotspot? Read on

Once the cafe blackboards and Deliveroo cyclists are in an area, it’s usually too late to invest 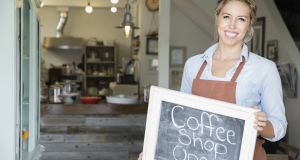 Once the trendy cafes with blackboards move in, it’s probably too late to make a canny property investment. Photo: Getty

Every house buyer knows the drill: when it comes to choosing a location to buy, and to stand any chance of spending one’s money well, it helps to see what areas will soon be on the up and up.

It’s an imprecise science, but there are a few helpful indicators. New Luas stops. A proliferation of Deliveroo cyclists in the area. Almond milk and ready-to-eat avocados in the local Centra. A cafe with an Illy sign above the door (and inspirational quote on a blackboard outside). Talk of artisanal producers, or pop-up doughnut shops. Mothers in Lululemon pushing Nipper or Bugaboo pushchairs. Parents who call out for kids called Siún, Finn, or Reuben. People with yoga mats. Bikes with baskets. Lots of them.

The problem with trying to get ahead of the gentrification curve is that, by the time any of these things have surfaced in a tangible way, it’s way too late to snag a property bargain. For those who have managed to save for a deposit, trying to predict the next trendy spot has become a leisure activity. Will Drimnagh wind up going the way of Stoneybatter? Will Rialto catch the Dublin 8 gentrification wave? Could the trendiness become airborne and make its way to Chapelizod? Will East Wall prove a wise investment?

It’s a game I played when I was buying property a decade ago, and one where the gamble ultimately failed to pay off. A new development was nearing completion, and there was a lot of feverish chat about it becoming “the new IFSC”. It was close to the city centre with transport links. There was a lone trendy pub, albeit one in which craft beers were anathema, and it was speculated that it would be joined by many others.

Ten years later and the area is the definition of “failure to launch”. Office buildings and commercial lets remain empty. The trendy pub is no more; the area is a no man’s land between other trendy areas. I’m still in negative equity.

Mecca for the upwardly mobile

Meanwhile, a friend who is a long-time resident of Phibsborough in Dublin 7 has gotten no end of entertainment from new reports hailing the area as a Mecca for upwardly-mobile types. The area has benefited from the Stoneybatter spillover, and was boosted significantly with the advent of the Luas Cross City.

Here’s the rub: she moved there specifically to avoid the yoga mums and the hipster blow-ins. Yet having set up shop during the bust, she can now sit back and enjoy the trendy spoils like smashed avocado and vegan brownies, all while paying half of what the area’s newer denizens fork out on rent.

According to the dictionary, gentrification – a term coined by Ruth Glass in the 1960s, is “the process of renovating and improving a house or district so that it conforms to middle class taste”. This is where the problems arise: middle class ideals supplant the traditional working class sentiment of an area. Traditionally, artists and young creatives get priced out of certain neighbourhoods once the yuppies and professionals invade, forcing them to move elsewhere. In New York, the displaced trendy types migrated from the Village to Brooklyn, and did the spadework for developers and middle class types all over again.

In London, Notting Hill and Camden became so expensive (and saturated with cliche) as to be unaffordable for creatives, who headed east. Taking over warehouses and lofts, they imbued their youthful cool into the fabric of places such as Shoreditch and Hackney, only to be enjoyed down the line by another invasion of well-off professionals. And so it goes.

Closer to home, Temple Bar was once a run-down part of town, preferred by young dreamers with more style than money. The place was old and crumbling, but very much living and breathing. We know what happened next. Subversiveness and subculture has been supplanted by paddywhackery and stag dos. The vanguards are long gone. It’s no longer a go-to area for the city’s leading lights: rather, it’s a “run-from” spot.

The problem now is that the artists, writers and creatives who inject the intangible trendiness and cool grit into an area to begin with are running out of areas to innovate. You’re more likely to find a musician, novelist or painter living at home with the parents than attempting to build a community on wasteland from the ground-up. Trailblazing doesn’t happen in warehouses and lofts; it happens online.

Not everyone is a fan of gentrification. In 2015, the Cereal Killer cafe in Shoreditch was targeted in an anti-gentrification protest. Perhaps it was an entirely arbitrary target of ire about London’s house prices. Maybe protestors felt that an outlet selling cereal for £5 a bowl was too close, both metaphorically and literally, to the area’s youngsters, often forced to rely on food banks.

For some, gentrification is a brutal thing, propelling poverty and driving vulnerable people from their homes. And in the great gentrification debate – buyers and developers are obsessed with bottling the gentrification magic – it’s these people who are often left out of the equation.

Perhaps it’s wrong to lay the blame at the feet of hipsters, or young families with notions of bourgeoisie grandeur. Oftentimes, their appetite for independent shops and artisanal cafes are born out of entirely wholesome reasons. Some areas, such as Stoneybatter, have managed to exact a harmonious balance between the influx of upwardly-mobile types and its existing residents. In fact, both appear to feed off the best of the other; the vim and energy of the former, the unpretentiousness of the latter.

Gentrifiers can make life better for locals in plenty of ways, argues Stuart Butler of the Brookings Institution, a think-tank. When professionals move to an area, “they know how to get things done”. They put pressure on schools, the police and the city to improve. As property prices increase, rents go up – but that also generates more property-tax revenue, helping to improve local services.

Meanwhile, I think I might just have earmarked an area in Dublin that’s ripe for a redo. The area in behind Smithfield and the Victorian fruit market – the Hacienda Quarter, if you will – is close to the city centre and, for now, there’s nary a pint of almond milk in sight. The regeneration of the market itself – an incredible, imposing structure – has seen several false dawns, but could feasibly become to Dublin what the English Market is to Cork. But if there are Irish souvenir shops and €20 bowls of Irish stew there in a few decades’ time, don’t come crying to me.