A house at the intersection of Booterstown Avenue, Mount Merrion Avenue and Cross Avenue has been home to Frank McGuinness for 33 years. 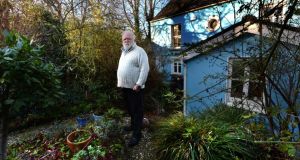 Frank McGuinness: “I love the garden but don’t have green fingers . . . a plethora of daffodils that will be appearing soon. I’ll enjoy them.” Photograph: Cyril Byrne

We moved into this house in 1981. There were a few of us; had to be to pay the rent. It came up for sale in the mid-1990s, when I’d just made some money from plays in London and on Broadway, Someone Who’ll Watch Over Me and A Doll’s House . That paid for buying and doing it up. My friend Clodagh Nolan, an architect and designer, lived across the road at the time and wanted to do the work. When I got the money we did a long, long nine to 10 months job on the house, transformed it from hovel to home.

There are signs of wear and tear but I love this house. I can work here and I’ve very good neighbours. I love where it is too, in the holy triangle of Booterstown Avenue, Mount Merrion Avenue and Cross Avenue. Covering the whole lot makes a terrific walk, all of the avenues are so different to each other.

Booterstown Avenue is the most serpentine; I feel most at home in it. Mount Merrion Avenue is one of the glories of Dublin. What’s great about it is the absolute splendour of its trees. The people who live there fiercely rejected a threat to cut them down a few years ago so they’re safe, for now. We’ve ruined so much in Dublin.

Cross Avenue is a refuge, a shy, retiring, secretive area. My friend, the poet Harry Clifton, is many things but he’s also the voice of Cross Avenue. We were in college together and then I met him on Cross Avenue. We’ve stayed friends for more than 40 years.

I came to Dublin when I was 18, stayed up the road in Willow Place and had my first pint in Gleesons. Over the years I’ve got to know John and Nora Gleeson: I’m blessed to have such a well-run, neighbourly, family pub on my doorstep.

Proximity to the sea totally determined my staying here. My Donegal nature attracts me to the sea, I need to be near water to survive. The sea is literally 100 yards away; I walk down to see it all the time. Even when I’m in a city like London I’m attracted to the Thames and would walk for an hour or so each morning along its banks.

Yet I’m not really a traveller. I could count on one hand the places I’ve stayed for more than a month. When I first came to Dublin I’d never been away from home before, nor away from my massive extended family.


Settled in Dublin
I was seriously grief stricken that first year, a feeling so powerful I think it’s stopped me travelling. I bitterly regret not going away for a year or so; three months in Birmingham is the longest ever I’ve been away. It’s the consequence of a protected childhood.

I knew I’d arrived and was settled in Dublin when I stopped worrying about not being able to find my way around.

My partner, Phillip, and I entertain here. We fit six comfortably around the table. I cook ordinary Irish food. I’ve eight or nine different things I can cook, and enjoy doing it. Phillip does the cleaning up. He comes here at weekends, for longer periods in the summer. His family spend time here too.

I love the garden but don’t have green fingers; anything I touch withers. I wanted to grow blue poppies but failed abysmally. Noreen Curran, a wonderful woman, puts a shape on the garden. It’s Phillip’s territory too. He and Noreen put down a plethora of daffodils that will be appearing soon. I’ll enjoy them – but no point my even trying to grow them.


In conversation with Rose Doyle