Two years after Kevin McCloud left, the owners are still working out how to live in their Co Down long house 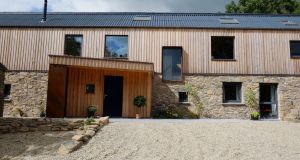 The Co Down ‘long house’ that featured on the C4 show ‘Grand Designs’.

Buying a site and having your own house built is enough of a challenge. Designing the house and doing most of the building work yourself, in your spare time, while living on site, in a cold and damp caravan, with two children and a third on the way, while running your own busy architect’s practice would test most people. Add to this Kevin McCloud, a Grand Designs camera crew, and an audience of about 3.5 million people, eager to journey along the familiar narrative arc of big dream, big budget, over budget, no contingency, late finish, happy or unhappy owner.

This is the story of the house that Elaine and Micah Jones built – a beautiful, timber clad, open plan, agricultural-barn-inspired “long house”; very much at home in the landscape of the gently rolling hills of Drumlins, Co Down.

Well, it’s almost the story. This build came in under budget and on time – just. “It was one of the greatest adventures, the luxury of being able to build your own house,” says Elaine as we drink coffee on a kitchen table made from offcuts of the cross laminated timber used to construct the first floor. “I think a lot of people get lost in the stress, and that a lot of self-builders don’t really enjoy the process.” It’s clear that Micah and Elaine did.

If you haven’t already watched it, you’ll find the episode among the eternal return of Grand Design repeats and discover that the only real problem they encountered on the journey to completing what is a very lovely house, was trying to get a large articulated lorry up the very small, potholed lane leading to the site. This isn’t to say that it was all easy, “there were hard moments like times in the caravan”, says Elaine, pointing to a couple of ramshackle outbuildings at the end of the garden. Their definition of a caravan is generous.

“In the middle of winter, we’d be lying in bed in the mornings discussing who was going to get up to turn the heat on because it was so cold; but for the most part it was a positive experience; we made a conscious decision to keep doing life as normal.”

In many ways, life after Grand Designs has continued as normal. After the mad rush to meet the deadline, while bringing a newborn baby home to a building site and emptying the contents of the house into cardboard boxes in preparation for the final shoot; the camera crew leaves, the dust settles and “you just want to get in and breathe for a bit”, says Elaine.

“To be honest, if it wasn’t for being on Grand Designs we’d still be about halfway through finishing the project,” adds Micah, as we take in the dramatic view from the full-height living room window towards the snow-capped Mourne mountains.

“The pressure of the television schedule meant that things got finished that may never have been.” For Elaine, her post-Grand Designs experience “has been thinking about how to live in this house – it’s what I was always looking forward to, working out where we want to put stuff and how daily life is going to work; which is fun”. But, there is also a new kind of “normal” that life after Kevin has brought.

“It has had a pretty big effect on our work-life,” says Micah. “Initially we had hundreds and hundreds of emails and messages from people saying that they really liked what we had done; every time the programme repeats, we get more messages.” This has translated into a number of new projects for the practice. One of which he tells me is “a potential game changer” and could be their biggest project to date, although what really excites him is that being on Grand Designs has given them the opportunity to raise the level of the quality of work that they do.

“That’s probably the bit that I wasn’t expecting,” says Micah. “I was kind of expecting a little bit of interest with having my name exposed, but not that people would be coming to us because they like our work; that’s never happened.” This isn’t to say that the work the practice was doing wasn’t good; it was – for his age, Micah is an extremely talented and mature designer – “it’s just that it hadn’t been of a quality that attracted people because of a specific job. People are now coming to us because they like the design, as opposed to clients who just want an architect. This means that we can push designs a little bit further.”

Quality rather than quantity

There is a certain inevitability that being on a programme as popular as Grand Designs would lead to a flurry of additional work for Micah. What isn’t a given is how he has chosen to deal with it. “I think there are some practices that have been on Grand Designs which go for growth rather than quality.” This doesn’t interest Micah who wants to focus on quality rather than quantity. “We don’t want to be like a fast-food style architecture practice where the quality is skin deep.” If this house is the measure of Micah’s current talents, then he has little to worry about.

“Daddy, Daddy, turn the light on,” shout the children as they play in the roof-space play area made of cargo rope. ”There isn’t a light up there yet,” replies Micah. It’s a reminder that almost two years after the camera crew and photographers left, the house remains a live project. “I’d be really disappointed if it was completely done,” says Elaine. There are minor bits and pieces to finish – stonework, landscaping, a small crack in the polished concrete floor, but with the new addition to the family and Micah’s additional workload, these will have to wait. This doesn’t worry Elaine; for her “it will never be finished, we want it to develop with us; as we grow as a family”.