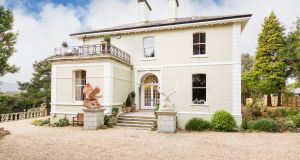 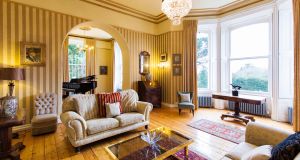 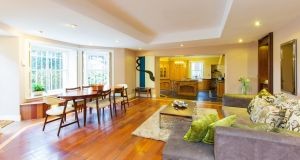 Reception rooms include a diningroom, drawingroom, study and music room 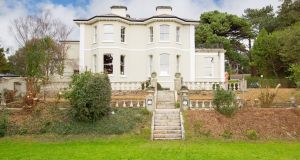 The O’Donnell family at the heart of the long-running Gorse Hill property saga is behind a €1.85 million acquisition of a stately Victorian home on one acre in Killiney, Dublin.

It is understood that retired solicitor Brian O’Donnell and his wife, Mary Pat, moved belongings into Laragh House on Killiney Avenue last September.

The sale of Laragh House was logged on the property price register in September 2017. The register does not disclose the identity of property buyers.

The substantial 641sq m (6,900sq ft) five-bed property is located just a short distance from the O’Donnells' former controversial Gorse Hill home on Vico Road which was sold by Bank of Ireland for €9.5 million in July 2017.

The O’Donnells lost their 10,220sq ft Gorse Hill home following a protracted battle with Bank of Ireland after the family amassed debts of €71 million. The couple were adjudicated bankrupt by the High Court in August 2013, and formally exited bankruptcy in late August 2017. At the time Mr and Ms O’Donnell were reported as living in the UK.

Laragh House has previously been home to a number of high-profile owners including John Hughes – co-founder of the Irish Press newspaper – and later, Joe “Spud” Murphy, the inventor of the Tayto crisp. It was placed on the market through estate agent Hunters in February 2016 seeking €2.45 million.

The house retains original features typical of the Victorian era, in particular grand reception rooms at hall level, including a diningroom, drawingroom, study and music room

The property once sat on a larger estate, but part of it was sold off a number of years ago and a small cul-de-sac development built on the lands. The house retains a sweeping driveway and terraced lawns and patios. A former coach house on the grounds has also been converted as a two-bedroom mews. At the time of sale it was noted the property needed an upgrade and it’s understood some work has begun on the property.

The house retains original features typical of the Victorian era, in particular grand reception rooms at hall level, including a diningroom, drawingroom, study and music room. The basement was refurbished in recent years and includes a large Dalkey Design kitchen, dining and living spaces, a wine storage area and sauna. Upstairs are five bedrooms including a master bedroom with en suite and a private balcony terrace.

In their long-running bid to retain Gorse Hill, one of the finest coastal properties in the capital, once valued at €30 million, the O’Donnells enlisted the unlikely support of the self-styled New Irish Land League to support the family’s plea against eviction.

Over several weeks there were daily media reports broadcast from outside the property, depicting the standoff between the anti-landlord movement and bailiffs trying to gain entry to the property. At one point Land League leader Jerry Beades described Gorse Hill as a “bog-standard house”.

In 2015, Brian O’Donnell walked into the Bank of Ireland agm and threw a set of keys with a keyring marked “The Bloody Keys” at Bank of Ireland chief executive Richie Boucher.