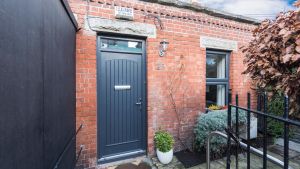 Long Lane is home to possibly Ireland’s narrowest house – number 19A measures just 1.8m at its narrowest point – and at just 36sq m is a likely contender for the smallest house in Dublin.

All of the properties along the Heytesbury end of the lane, which links to Clanbrassil Street, are narrow and inside can sometimes feel like one long corridor.

Number 25, which was purchased by its current owners in 2014 for €481,000 bucks this trend. The overhaul given to the terraced red-brick in 2006, under the design of Westport-based architects Simon J Kelly, saw the installation of an internal courtyard, which acts as a natural divide between the dining and living area while throwing a vast amount of light into the rooms.

It was a bold move, because sometimes dividing a space can have a shrinking effect, but this has the opposite effect. A bedroom was added to the rear which opens out onto the rear garden. This two bedroom property has the largest garden on the terrace, set against the elegant backdrop of Iveagh Buildings.

The photographs do not really do this house justice. At 71sq m (764sq ft) it feels quite a lot larger than it actually is. This is further emphasised by the use of white paint throughout – which accentuates the vaulted ceiling in the living room – while a pale kitchen with oak countertops echoes the flooring in both living and dining spaces.

There are many interesting details, such as illuminated recessed shelving and lots of storage in the spacious bathroom allowing the rooms to be clutter free.

The rear garden is a surprise due to its size and bold colours, it could however do with more shrubs and the courtyard in the centre of the house would make an ideal spot to grow herbs, as it is a few paces from the kitchen.

Quillsen is seeking €545,000 for the property which is in turn-key condition. It would make a fine alternative for buyers considering an apartment as it has a courtyard in addition to a garden. Its position just off Heytesbury Street, makes it one of the most desirable areas of Dublin 8.

Moving abroad alone: ‘You wonder why you are leaving everyone who has ever loved you’
8