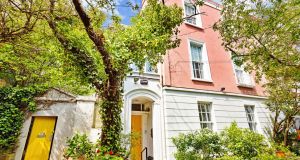 8 and 8a Seafield Avenue, Monkstown. 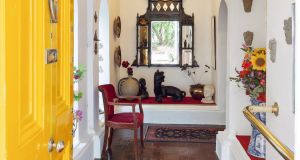 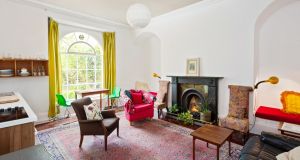 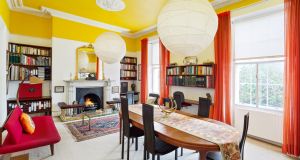 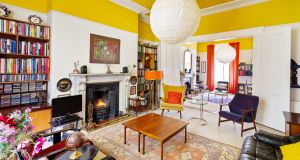 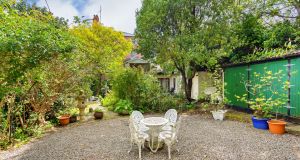 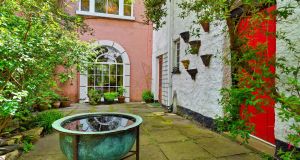 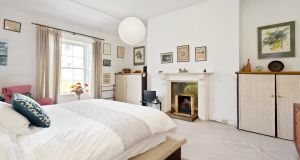 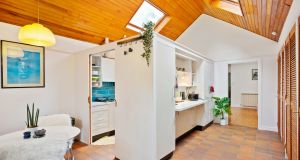 Over the years many of Monkstown’s period homes have been enhanced by upgrades and contemporary extensions.

Number 8 Seafield Avenue is a far more natural beauty. Situated at the Seapoint end of the avenue within a minute’s walk of the beach and Dart station, the fine two-storey over-ground period house is hidden behind dense planting, shyly concealing its grace and charm.

The property belongs to the O’Neill family, whose mother Barbara was a leading landscape architect who worked with her husband, Anthony – also an architect – on a number of high-profile public projects including the park centre building at Glenveagh National Park in Donegal,and the 1997 visitor centre at Brú na Bóinne, Co Meath which is built into the hillside, its roof covered with flowers and weeds of a wild meadow.

The pair spent much of their early careers working on large landscape projects in Montreal, and such was the extent of the couple’s contribution to urban planning in Montreal that the city named a street, O’Neill Drive, after them.

Moving back to Ireland in the late 1960s they became one of architecture’s dynamic duos in the 1970s, 1980s and 1990s. Barbara passed away almost a decade ago but her legacy lives on in the property’s garden whose verdant planting frames every one of its six-pane windows. To the front there are lilacs and cherry trees, the latter grown in a vertical fashion designed to buffer the building from the sea breezes but not to inhibit the sea views.

To the rear is a mature shade garden, designed because Barbara had lupus and couldn’t take direct sun. On the first floor return the giant tree fern peeks through its large picture window. It was one of the first to be imported into the country from Tasmania and spent three years in quarantine before his mother could plant it, recalls one of their sons, Shane O’Neill, also an architect, who worked in practice with his father and began in the office at the age of 12 colouring in golf courses.

It’s easy to see what attracted the couple to the property. It has ceiling heights of three metres at entrance level and 3.5 metres at first floor and can take the punchy strong colours. The entrance hall has been painted a Coleman’s mustard yellow that helps to show off its ceiling rose with its cornicing picked out in a contrasting grey.

Here a pair of arched windows softly illuminate the space and the floor’s mahogany-stained parquet is laid out in a basketweave pattern that formed part of the mid-century aesthetic that the couple brought with them from their time in Canada.

The house was built about 1828. When the O’Neills bought it they discovered that driftwood, found quite possibly on nearby Seapoint beach, had been used to construct the stairs and they had to rebuild part of the structure.

During their working lives the couple operated from an adjoining mews office, accessed from the house and built in the early 1990s. The current two-bedroom structure, 110sq m/1184sq ft, now has its own separate entrance, a kitchen that leads through to a dining room and living room that overlooks a west-facing patio. There is one double bedroom to the rear and a second huge room on the first floor, accessed via a spiral staircase

In the main house there is a very fine drawing room on the first floor that interconnects with a square-shaped sitting room to the rear.

The kitchen is at this level and is a long, narrow room with the eat-in part set into what was originally a bay window which the family squared off. There is a utility room to the rear that you step down into.

On the second floor there are three bedrooms, two to the front and the master to the back. The family bathroom is on the return.

The Georgian house extends to 292sq m/3,143sq ft and, together with the two-bedroom mews, is asking €2.5 million through agents Lisney.