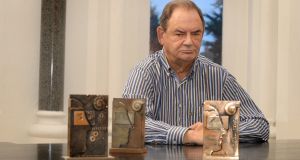 James Pike of O’Mahony Pike Architects has been awarded the RIAI James Gandon Medal for Lifetime Achievement. Carole Pollard, president of the Royal Institute of the Architects of Ireland, said: “In the development of housing in Ireland, James Pike has arguably contributed more than any other architect,bringing innovation and creativity to both the planning of communities and the building process.”

His practices – beginning with Delany McVeigh and Pike in 1964 and O’Mahony Pike Architects, established in 1992 – have built many housing schemes in the capital, including Mount St Anne’s in Milltown and Hanover Quay in Dublin, the latter winning the RIAI Silver Medal for Housing in 2009.

Pike was involved in the planning of the Dublin suburbs of Adamstown and Pelletstown and is currently working on the Glass Bottle site in Poolbeg, Dublin, where 3,500 homes are planned along with shops and offices.

Pike trained in London and moved to Ireland the year after the first planning Act was introduced in 1963. His thesis at Regent Street Polytechnic had encompassed the new areas of prefabrication, computers and masterplanning and he applied all three in his career in Ireland, beginning with masterplans for Howth and Westport.

Urban planning and housing have remained constant interests in both his work and at policy and development level. “I think it is important, apart from doing the architecture, to make a contribution to how society develops,” he said.

Pike has participated in every housing conference hosted by the Department of Local Government and RIAI since it began in the 1970s, and he oversaw publication of the RIAI’s Dublin, A City in Crisis in 1975. He is a former president of the institute and a founding member of its task force on housing and the Urban Design Forum.

The James Gandon Medal is awarded by RIAI presidents during their term of office. Previous winners are Des McMahon, Ronnie Tallon and US-based Irish architect Kevin Roche. It is the biggest personal honour in Irish architecture; the Gold Medal is the highest honour for a project.

“It is great that my work has been appreciated,” said Pike. “Both for my practice over 50 years and for the work I put in with the institute and other bodies.”